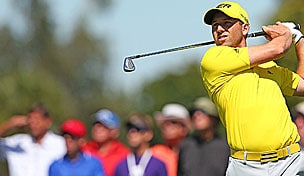 DORAL, Fla. – Sergio Garcia and Michael Thompson, last week’s winner at the Honda Classic, played together Saturday at the WGC-Cadillac Championship and both shot 67, which tied Tiger Woods and Nicolas Colsaerts for the lowest score of the day. Both are tied for fifth place.

Garcia opened with a 66 and shared the first-round lead but he struggled in Round 2 with an even-par 72 on a day when there were 26 rounds in the 60s. Although the putter has been the one thing that’s always kept Garcia from winning more, he needed only 26 putts in the third round, with eight one-putt greens.

“Even though it was playing tougher – different wind, a bit hard, a bit more intensity in the wind – I definitely played much better than yesterday,” Garcia said.

Thompson also had 26 putts in the third round and recorded four birdies, a bogey and an eagle on the par-5 10th hole.