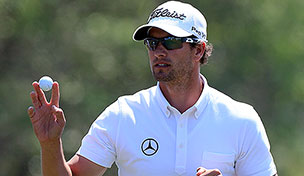 PALM HARBOR, Fla. – Adam Scott had a breakthrough with his short game this winter, and it's so good now that he hardly even has to use it.

Scott had a putt for birdie on 16 holes in a second round that was without a bogey and without much stress. He wound up with a 5-under 66 that left him one shot behind 31-year-old rookie Shawn Stefani.

Stefani had to scramble more that he would have preferred, though he converted all the putts he felt he was supposed to make in his round of 70.

Temperatures finally began to warm, and without much wind throughout the day, the tournament was wide open going into the weekend. Stefani was at 7-under 135, one shot ahead of Scott and past champion K.J. Choi, who had a 67.

Twenty players were within five shots of the lead at the halfway point, a group that included everyone from Sergio Garcia and Matt Kuchar to 19-year-old Jordan Spieth and Erik Compton, the two-time heart transplant recipient whose 65 was the low round of the day.

It was the highest score to lead at Innisbrook in five years.

Scott was right in the middle of it all, which is where he wants to be.

The Australian hasn't shown too many scars from making bogeys on the last four holes to lose the British Open last summer. He finished the year by winning the Australian Masters, though it was a month later when he was working on his game at home on the Gold Coast that he experienced a significant turnaround with his short game.

''Just had a really nice feeling going that day, whatever it was, and I managed to get through the whole shag bag of balls hitting every chip the same,'' he said. ''Everything was very controlled and consistent. ... I've felt my confidence grow on the course with the pitching and chipping.''

Scott said when he was hitting the ball poorly in 2009, it put extraordinary pressure on his short game because he was missing greens. In this case, he said a solid short game has relieved any tension in the long game, and it's starting to show.

He closed with a 68-64 on the weekend at Doral, and carried that to a tougher Copperhead course at Innisbrook.

Scott has a limited schedule before his next crack at a major next month. The Tampa Bay Championship is only his fourth event this year (and fourth in the last five weeks), and then he plans to shut it down until going to Augusta National.

Choi has switched to a claw grip for putting, and he likes the results. He took only 12 putts on the back nine Friday, including birdies on two of the par 3s.

''Sometimes very nervous, but I keep going more in line,'' Choi said. ''But still, 6 under par, a very good position. My confidence is very well.''

John Daly registered his 15th score of 10 or higher on a hole in his PGA Tour career when he twice tried to get out of the trees, took two penalty drops and made what he called a ''beautiful chip'' to get up-and-down from 30 yards on the par-4 third hole. He made a 10 and had an 81.

Even though the tournament is at the halfway point, Stefani's confidence is growing. He finally made his first bogey of the tournament on the seventh hole, and then rebounded with a 5-iron to 10 feet for birdie on the par-3 eighth.

''Today was a little bit more of a struggle,'' Stefani said. ''Didn't really drive it super great. Didn't hit some of the best iron shots. But I scrambled well and I putted really great. When you putt good, that usually keeps rounds going, and that's pretty much what happened today.''

Harris English made four birdies on the tough par 3s to atone for not making up any ground on the par 5s. That gave him a 69, leaving him two shots behind with close friend and fellow Georgia alum Brian Harman (70), and Jason Dufner (66).

Scott played in the same group with Geoff Ogilvy, who is No. 49 in the world and needing to stay there by the end of the month to get into the Masters. Ogilvy was a runner-up at the Honda Classic to get back into the mix, though he was on the ropes Friday morning with a 39 on the back nine. He birdied three of his last four holes for a 72 and wound up only six shots behind Stefani.

Ogilvy wants to get into the Masters so badly that he said he wouldn't watch on TV if he wasn't there. He used to watch all the time before he played the Masters.

Scott made a detour this week to Augusta for a practice round with Ernie Els, who won the British Open when Scott collapsed.

''I thought it was in the best shape I've ever seen it in this early in the year,'' Scott said. ''It's Augusta. It's pretty much perfect.''

As for playing with the Big Easy? Scott says it was not the least bit awkward at Royal Lytham & St. Annes, nor is it today.

''I think he's an incredible talent and he's one of the best players I've of seen on a golf course,'' Scott said. ''I've played so much golf with him and seen him do such incredible things. I think he could have won 10 majors. So he paid his dues, and whether he won it or I helped him win it a little bit, it doesn't matter. He won it. Probably eased the pain a little bit that he was a closer friend of mine here, and I could feel some happiness for him.''

What made him the most thrilled Friday was going around Innisbrook without a bogey, putting him in a good position for the weekend.

''To go bogey-free anywhere is good, and I think here is particularly good,'' Scott said. ''It's quite a tricky golf course, and mistakes are easily made. Very pleased with that. I got myself right in contention for the weekend, which I'm pleased about.''

DIVOTS: Defending champion Luke Donald had a 72 and was seven shots behind. ... Vijay Singh had a 73 and made his 17th straight cut dating to the U.S. Open last year. ... Daniel Summerhays was one shot over the cut line when he flew the green on the 18th hole. He holed a tough flop shop for birdie to make the cut on the number.