Stefani living a dream on the PGA Tour 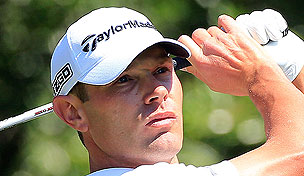 PALM HARBOR, Fla. – Sorry to all the dreamers and preeners and get-rich-quick schemers. Apologies to Golf Channel’s long-running show of this title.

But the truth is the truth: In the world of professional golf, the notion of a “big break” rarely exists.

Four years ago, Shawn Stefani was a mini-tour regular still waiting for a break – big or otherwise. He had entered Q-School three times at that point – and three times failed to advance to the final stage. He finally earned his first start in a PGA Tour-sanctioned event when he reached the 2009 U.S. Open, thanks to a qualification strategy developed through plenty of practice.

'You've got to go out there and play every round just like it's a round at your home course,' Stefani said at the time. 'You can't think about what's at stake. That's the best way to play. Focus on what you're doing rather than the possibility of what could happen.'

That may not have turned out to be his break – Stefani (pronounced “Stephanie”) posted scores of 73-73 to miss the cut at waterlogged Bethpage Black – but that perspective has opened doors for the Baytown, Texas, native. Last year, in his first full season on the Web.com Tour, he won twice and finished sixth on the final money list to earn his PGA Tour playing privileges for this season.

While he’s struggled to find success in the big leagues so far, everything seems to be coming together this week, as scores of 65-70 have vaulted him to the top of the Tampa Bay Championship leaderboard entering the weekend.

“I knew it was Friday, and the lead is one thing, but leading on the weekend is another,” he said after a second round that included three birdies and two bogeys. “Today I just wanted to go out there and play golf and hit each shot the best I could and really have some fun. That's really what I did. I really had a lot of fun out there today, even though I didn't really play my best but I scrambled well. That was a lot of fun today.”

This may not be the most star-studded leaderboard we’ve seen in recent weeks, but the 31-year-old rookie will be vying with the likes of such proven veterans as Jason Dufner, Sergio Garcia, K.J. Choi and Adam Scott on the weekend.

When it comes to professional golf’s 1-percenters, Stefani may not have much in common, though he also doesn't seem like the type for whom that will be much of a bother.

“At the end of the day it doesn't matter to me, because I just have to go out there and focus on what I'm doing and control my thoughts and my process,” he explained. “It really shouldn't matter who I play with.”

That attitude should serve him well on the weekend, as he enters unfamiliar territory. In six previous starts this season, Stefani has made just three cuts, with a season-best share of 39th place coming at last week’s Puerto Rico Open.

If he’s looking for particular inspiration this weekend, he can do worse than looking back on what he said prior to making that first start at the U.S. Open four years ago.

'I've always dreamed about it,' he said then about getting that big break. 'And sometimes those dreams come true.'

Stefani is living that dream right now, though it’s less the result of a big break and more a derivative of perseverance, hard work and talent. He’s had to make for himself any breaks that are coming to him now.