Sights and sounds from Wednesday at Augusta 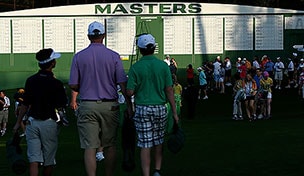 It’s Wednesday afternoon at the Masters, and it’s time to take a stroll around Augusta National.

If you’ve never been here, I’ll be your eyes and ears. If you have been here, well, I’ll help you remember what it’s like.

Our first stop is “The Tree,” the famous towering oak behind the clubhouse, a tree reported to be more than 200 years old. If this tree could talk, the stories would captivate us. It’s planted between the locker room and the first tee. Everyone who is anyone in golf has wandered under this tree through the years – from Bobby Jones to Ben Hogan to Jack Nicklaus to Tiger Woods. More than that, the movers and shakers all find their way here – from PGA Tour commissioner Tim Finchem to Acushnet CEO Wally Uihlein to USGA executive director Mike Davis and agent Mark Steinberg.

There are other extraordinary people who you might not have heard about who find their way here, too.

David Meador, 64, was here Wednesday to receive the Golf Writers Association of America’s Ben Hogan Award. The honor has been presented annually since 1954 to an individual who has continued to be active in golf despite a physical handicap or serious illness. Meador was 18 when a car accident robbed him of his eyesight with his optic nerve crushed in the violent crash. He is the Hogan Award winner for the way he persevered through blindness, through two bouts of cancer and through all the surgeries required to overcome complications his cancers caused. He’s a three-time winner of the U.S. Blind Golf Association national championship.

Wednesday was a day Meador will never forget with Phil Mickelson, Gary Player and so many other big names in the game stopping to congratulate him out here under the tree.

Meador says golf helped draw him out of his despair and rediscover himself.

“The first shot I hit [after being blinded], that was the real me,” Meador said. “I was reconnecting with the real me.”

Here, just beyond the tree, there’s outdoor dining for those with the right badge. It’s a beautiful little setting with tables under umbrella canopies. You’re told the colossal lump-crab and shrimp cocktail is popular. So is a drink called the Azalea, a pinkish concoction that is made up of one part lemon juice, one part pineapple juice, three parts gin and grenadine.

You’re told just a day before, U.S. Amateur champ Steven Fox introduced himself to Jack Nicklaus out here. Fox was just hoping he could say hello, but Nicklaus gave him so much more to remember. He invited Fox under one of the umbrellas and they chatted for 45 minutes.

Walking past here now, we see Jack’s wife, Barbara, talking with Annika Sorenstam, Annika’s husband Mike McGee and Honda Classic executive director Ken Kennerly. We also see Keegan Bradley returning from the Par 3 Contest, and so we head over there to watch.

It’s a spectacular day with a sapphire sky glowing over an emerald carpet of grass.

There, over at the ninth tee, there’s Ernie Els. He hasn’t played the Par 3 Contest in six years, but after failing to qualify for the Masters last year, he returns here determined to soak up the little joys of Masters week more completely. He is here today with his 14-year-old daughter, Samantha, as his caddie. She had never done this before, and she told her father she wanted to tote his clubs. So Ernie, who has endured his share of heartache in failing to win this major championship, made a run at winning the Par 3 Contest. He steered his final tee shot to a foot and tapped in the birdie to go to 4 under, which tied him for the lead as he walked off the course.

“I probably needed a year off, to be honest,” Els told me a couple weeks ago. “I think it was a good thing I missed it, in how it has given me a kind of new, fresh start.”

After tapping in for that last birdie Wednesday, Els marches over to Samantha, and they wrap arms around each other. It was a special day, you can see that.

Els doesn’t want to leave Augusta National feeling like a jilted lover again, even if things don’t go right for him again. He’s tired of trying too hard here, wanting it too badly. He wants peace with this course.

“Augusta is that kind of place, where the dream and the story, it’s all almost written for some players,” Els said when we spoke back at Bay Hill. “Maybe mine was there [in the ’04 loss to Mickelson], and I didn’t quite take the opportunity. Who knows? If I never win the Masters, it will be disappointing. I’m obviously on the wrong end of it now. It’s a course and a place that has given me a lot of hope of winning it, but it is definitely bittersweet memories.”

The Par 3 Contest is a lot like games at a family picnic. Robert Garrigus’ 9-month-old son, R.J., stole the show hiking alongside his dad with his little jumbo driver. Rory McIlroy played alongside his girlfriend, tennis star Caroline Wozniacki, as his caddie.

It’s time to go down to see Amen Corner now, to check out the state of the azaleas and dogwoods there. We’ll hear later that Arnold Palmer, Jack Nicklaus and Gary Player made a late afternoon appearance in the Par 3 Contest. We’ll hear that Tom Watson got Arnold Palmer to autograph a Masters flag. We’ll wish we saw that, but any walk down to Amen Corner is worth the trip. We see something special on the way. We see a family of four stopped in the crosswalk in the middle of the 15th fairway, posing for a photo that they plan to use as their Christmas card.

As trilogies go, Amen Corner is an epic tale of wonder and woe. The most famous trio of holes in golf is as beautiful as it is unsettling. The azaleas are sprawling like fire right now at the feet of all the towering pines down here. The dogwoods are aglow in splintered rays of sunshine piercing the treetops. There is beauty and trouble here for players.

Nobody is playing through down here now, but it doesn’t matter, Amen Corner is star and stage. There are folks snapping shots of the 13th green with nobody on it.

It’s time to head back to the media center, and we notice how many people are carrying those hard, plastic Masters beer cups in big stacks. It’s Wednesday. It’s visitors day, and apparently nobody is throwing away their beer cups. They’re souvenirs, something to make the beer taste better at home. We also notice how many folks are carrying cameras, posing with Augusta National’s famed holes as backdrops.

As good walks go, this one wasn’t spoiled.