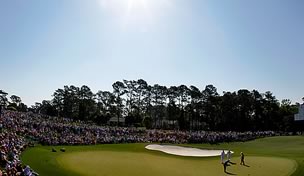 SAN ANTONIO – Augusta National, it is not, but this week’s stop at TPC San Antonio apparently provides a stiff enough challenge that it has attracted the likes of Rory McIlroy, Matt Kuchar, Charl Schwartzel and Ian Poulter.

And not just because they want competitive practice before the year’s first major.

“I like this golf course, being pre-Augusta or not,” Kuchar said Tuesday. “It’s nice to not play a course that’s 7,800 yards and wide open. This course offers some good variety.”

Much has been made of this year’s schedule in which the Shell Houston Open was bumped out of its usual pre-Masters slot. Tournament officials have found a niche in setting up the course in Humble, Texas to mimic the conditions players will face at Augusta. If that’s the case, look out for winner D.A. Points – with seven missed cuts in 10 starts – next week.

What to expect from this week’s venue?

True, it is not Augusta-lite. (There is much more sand in the greenside bunkers, for instance.) But consider this: The rough is shorter this year because the tournament is being played earlier; they have heavily overseeded to provide similar grass conditions; and as undulating as the greens on the AT&T Oaks Course are, the approach shots are similar to Augusta in that they must be precise and find the proper level.

“I think this would be a great test before Augusta because of the greens and how quick they can get,” said defending champion Ben Curtis.

Apparently, Phil Mickelson disagreed, as Lefty played in Houston but bypassed this week’s tournament because the venue, he said, was not ideal for Masters preparation. (This week’s field has 16 players who are already exempt into the Masters.)

For one thing, it likely will be windier here than in Georgia. But Padraig Harrington dismissed the notion that a windy week can wreck a player’s swing heading into Augusta.

“Nobody wants to be blown off the golf course,” he said. “But at this stage, professional golfers should have enough experience to be able to handle wind and not let it affect detrimentally their posture or ball position or swing. So hopefully I’m big enough and old enough to manage that bit.”