LPGA finally gets back to American soil 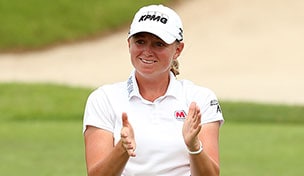 The world’s best women are upping the ante early.

The RR Donnelley LPGA Founders Cup begins Thursday at JW Marriott’s Wildfire Golf Club in Phoenix, with eight of the top 10 in the world among the 144 players competing for a $1.5 million purse.

This week marks the third rendition of the Founders Cup, an event created to honor the 13 founders who started the tour 63 years ago.

Pettersen arrives as the hottest player fresh off her latest win, a Ladies European Tour victory at last weekend’s Mission Hills World Ladies’ Championship in China. She won a duel with Park, coming from two shots behind in the final round to win by a shot.

“We all bring the best out of each other, and I think it elevates the game and women’s golf, the competition down to the bitter end,” Pettersen said. “I’m just very happy that I managed to get this one, this time.”

Tseng is looking for her first victory in almost a year, but she made a good start to 2013 overseas, finishing second at the Women’s Australian Open and tying for third at the Honda Thailand.

Tseng won three of her first five starts a year ago. She will also defend next week at the Kia Classic, her last victory anywhere.

“It’s getting really tough out here,” Tseng said. “Everybody’s working so hard to play well, to try to be No. 1. It’s not easy to win or get a top 10. People don’t see how hard we’re working and trying to improve every week. We’re all pushing each other to keep getting better and better.”

That’s evident with so many top players off to winning starts this year.

“I’m very happy with my game right now,” Tseng said. “I just need to keep improving my swing, to get more consistent, but everything was good in Asia.”

Tseng won in trying conditions in Phoenix a year ago, prevailing in a cold Sunday finish that saw three weather delays, including delays for hail and lightning.

“I remember putting in the dark on the last hole,” Tseng said. “I remember being 45 feet away and needing to two-putt and barely being able to see the hole.”

Tseng got her two-putt, finishing strong. This week, she will be looking to start strong in a bid to win the tour’s American start.