Lewis grinds out 73 after early triple 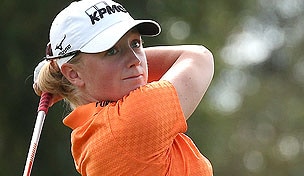 RANCHO MIRAGE, Calif. – Rolex world No. 1 Stacy Lewis dug a hole with a triple bogey on her first nine Thursday at the Kraft Nabisco Championship and then went to work trying to climb her way out.

Lewis pushed her tee shot right into the water at her fifth hole (No. 14). After a drop and a difficult pitch, she three-putted.

Lewis made three birdies and a bogey the rest of the way to post a 1-over-par 73.

“I came out really flat and had a lot of in-between numbers, was in a couple divots, had some weird shots,” Lewis said. “I was definitely disappointed, but I made some putts there on the back nine, which was important.”

Lewis was just five shots back when she signed her scorecard near the end of the morning wave. She won here in 2011 and has three finishes of T-5 or better in five starts on Mission Hills' Dinah Shore Course.

“This course you are never really out of it,” Lewis said. “You can shoot a good number one day and be right there. I just kind of had to fight through it.”

Lewis opened with a 74 last year and tied for fourth.