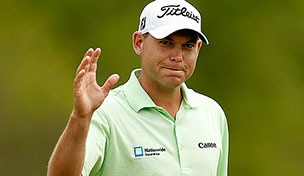 HUMBLE, Texas – Even as the clouds rolled in at the Houston Open, Stewart Cink started to see some light in his game.

Cink saved par from the bunker on the 18th hole Saturday at Redstone Golf Club for a 4-under 68, giving him a share of the lead with Bill Haas going into the final round. Cink is winless in 81 starts since the British Open at Turnberry in 2009. This is his first time with at least a share of the third-round lead in nearly five years.

And it doesn't figure to be easy.

One week after he shared the 36-hole lead at Bay Hill, Haas made seven birdies over his last 13 holes for a 67 and was tied with Cink at 11-under 205.

Sunday suddenly became loaded with possibilities that might even feature Phil Mickelson.

Twenty players were within four shots of the lead. Only three of them – Dustin Johnson, Keegan Bradley and John Merrick – have won on the PGA Tour in the last year. And 12 of them can earn a trip to the Masters by winning.

''Tomorrow you're going to have to play very well,'' Haas said. ''You can't just hang on and hope everybody else will fall back.''

Steve Wheatcroft, the journeyman who only got into this tournament through a Monday qualifier, got off to a good start and fell back with an embarrassing finish. Wheatcroft was tied for the lead when he shanked a shot from the greenside bunker on the 18th, the ball coming out at a 45-degree angle, over the green and almost into the gallery. He made a 15-foot putt to salvage bogey for a 72.

''If you don't catch it perfectly, it runs across the green into the water,'' Wheatcroft said about his bunker shot. ''I opened the club face just trying to hit a high soft one and obviously I missed most of the club face.''

Nine players were only two shots behind, a group that included former British Open champion Louis Oosthuizen (65), former world No. 1 Lee Westwood (67), former PGA champion Keegan Bradley (67), two-time major champion Angel Cabrera (69) and Henrik Stenson (68), who is one round away from playing his way into the Masters through being top 50 in the world.

Mickelson finished his round of 67 before the leaders teed off, and he closed with a wedge into 6 feet for birdie. He wound up five shots out of the lead, still within range of trying to add another win before heading to Augusta for the Masters.

Mickelson met with former president George H.W. Bush, who came to the tournament on Saturday.

Rory McIlroy had a chance to join the mix. Swinging more freely, the world's No. 2 player was poised to reach 6-under for the tournament with a superb bunker shot to 5 feet for birdie on the 13th hole. He missed the putt, and then missed the 3-footer he had left and wound up with a bogey. McIlroy short-sided himself on the next hole for bogey, and dropped another shot on the 18th with a tee shot into the water. He had to settle for a 71 and was at 214, nine shots behind.

Wheatcroft and Kokrak are among seven players within four shots of the lead who have never won on the PGA Tour, and Wheatcroft still has high hopes of winning to get a two-year exemption in the big leagues. He would be the first Monday qualifier to win since Arjun Atwal in August 2010 at the Wyndham Championship.

Even so, the biggest surprise might have been Cink.

He has virtually disappeared since denying Tom Watson at Turnberry in a playoff four years ago, and he has fallen to No. 272 in the world ranking. Cink showed some signs of turning it around with a chance to win the Humana Challenge at the start of the year, and this might be his best chance yet.

''I'll be nervous and I definitely will not be ignoring the fact that I'll feel a little bit nervous tomorrow,'' he said. ''But that's just natural human behavior and I'm looking forward to it. To get back in the hunt is what you play golf for when you're out on the PGA Tour. It's a lot of fun and hard work, but I can't wait.''

Cink can only hope he hasn't forgotten how to finish, though experience could play a big factor.

Oosthuizen was the 54-hole leader in the Houston Open last year. Bradley was relieved to finally see some putts go in the hole. Westwood has started slowly this year, but he feels his game is rounding into shape at Augusta.

''There isn't a lot of experience at the top of the leaderboard,'' Westwood said. ''There are some tough shots out there. Few birdie chances if you're hitting it well.''