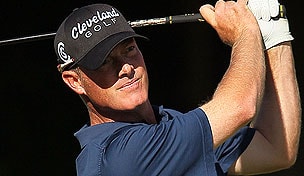 PALM HARBOR, Fla. – Aiming where you want to hit the ball would seem to be a fundamental concept to a professional golfer. But as Tag Ridings points out, it's often easier said than done.

That epiphany seems to have worked for Ridings on Thursday in Tampa, where he posted a 3-under 68 at the Tampa Bay Championship and sits tied for second midway through the first round.

The odd part is that Ridings hit only 5-of-13 fairways and 8-of-18 greens in Round 1, so it remains unclear just where, exactly, he was aiming. It was Ridings' scrambling and 23 putts that helped keep him in contention.

Ridings, 38, has split time between the Web.com Tour and the PGA Tour since 2002, and is seeking his maiden Tour victory this week. His best finish is a T-2 at the 2004 Michelin Championship in Las Vegas.