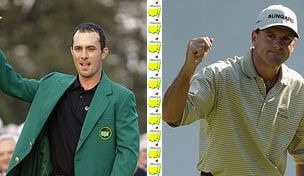 Tiger Woods tried to make history that week. He did not. Martha Burk tried to change history. She could not. Mother Nature tried to prevent history. She fared better than the other two.

Woods’ bid for an unprecedented three-peat, Burk’s protest over gender equality among Augusta members and the awful, awful elements are significant sidebars to the 67th playing of the Masters Tournament.

But they are not the principal subjects of the story.

Mike Weir won the 2003 Masters. He wasn’t supposed to, but he did. As the 10-year anniversary of his maiden major victory nears, Weir offers a detailed look on that week in Augusta, Ga. Click here to read Mercer Baggs' story.

One can only imagine what could have been for Len Mattiace. Even Len Mattiace. But 10 years after coming agonizingly close to winning the Masters, the 45-year-old, recalls that week – particularly, that Sunday – with great affection. Click here to read Will Gray's story.