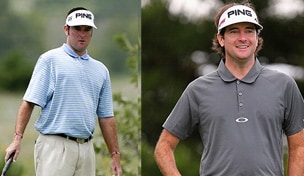 A lot has changed for Bubba Watson since his rookie season on the PGA Tour in 2006.

For starters, he's won four times, is now a father and inside his closet hangs a green jacket. But that's not the only article of clothing he sports that's different now than seven years ago.

In the inaugural edition of a new weekly fashion feature titled 'Throwback Thursday,' here's a look at Watson when he first broke out on Tour in '06, side-by-side with a photo from Kapalua this week.