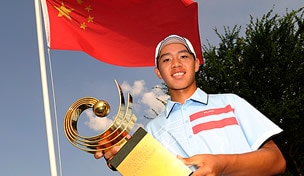 Getty Images
FARMINGDALE, NY - JUNE 22: Ricky Barnes tosses his putter on the 18th green after a missed birdie putt during the continuation of the final round of the 109th U.S. Open on the Black Course at Bethpage State Park on June 22, 2009 in Farmingdale, New York. (Photo by Andrew Redington/Getty Images)  -

Already with a spot in one major championship this year, 14-year-old Tianlang Guan will set his sights on securing a berth in the Open Championship at this week’s International Final Qualifying, which begins Thursday in Asia.

Four Open berths are available this week at Amata Spring Country Club in Chonburi, Thailand – also the site of Guan’s victory at the Asia-Pacfiic Amateur Championship, where he earned a spot in The Masters.

Other notables in the field include Washington sophomore Cheng-Tsung Pan, the fifth-ranked amateur in the world, Hideki Matsuyama, who played in the Masters in both 2011 and ’12, and former Great Britain and Ireland Walker Cupper James Byrne.

The other IFQ sites: Royal Johannesburg and Kensington Golf Club in South Africa on March 5-6; Gleneagles CC in Texas on May 20; and Sunningdale in Europe on June 24.