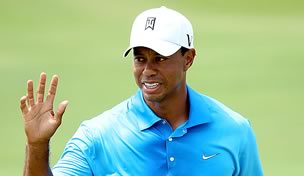 Getty Images
BALTRAY, IRELAND - MAY 17: Shane Lowry of Ireland celebrates after winning on the third play-off hole during the final round of The 3 Irish Open at County Louth Golf Club on May 17, 2009 in Baltray, Ireland. (Photo by Ross Kinnaird/Getty Images)  -

Tiger Woods, the leader in the season-long FedEx Cup points race, is ready to start the playoffs.

As expected, Woods has committed to play next week’s Barclays event, the first of four events in the FedEx Cup playoffs. The Aug. 23-26 playoff opener will be held at Bethpage State Park in Farmingdale, N.Y., site of Woods’ 2002 U.S. Open victory.

Woods, the 2009 FedEx Cup champion, has held the top spot in the points race since his victory at the AT&T National in July.

Last year, Woods didn’t even qualify for the season-ending playoffs, finishing the regular season at No. 129 in points (top 125 qualify). In 2010, he played the first three playoff events but did not advance to the Tour Championship.