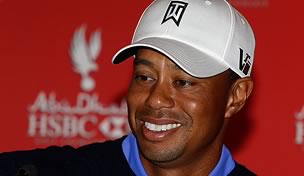 That’s always been Tiger Woods’ take on what makes a good season a great one and when he spoke to the media for the first time this season on Tuesday at Abu Dhabi Golf Club it was easy to detect more than a little excitement in his voice when he was asked about the year’s major championship venues.

“Three of the four (major venues) I really like. The other one I have never played,” said Woods, referring to Merion which returns to the U.S. Open rotation for the first time since 1981. “From what I hear, I don’t think they (the U.S. Golf Association) are going to have the intermediate cut. I think they are just going to have rough and fairway, that’s it.”

In April, Woods will make his 19th start at The Masters (his 17th as a professional) where he’s won four times with his last green jacket coming in 2005. It hasn’t exactly been a drought since that ’05 triumph, however. He has finished inside the top six every year since then with the lone exception being last year’s tie for 40th.

“Obviously, I love Augusta,” he said.

He probably doesn’t have the same affinity for Muirfield, site of this year’s British Open and where Woods tied for 28th in 2002 following a third-round 81 in horrid conditions.

“Muirfield is a wonderful test,” Woods said. “I just happened to catch a bad day in 2002.”

As for Oak Hill, the Rochester, N.Y., layout that will host its third PGA Championship in August, Woods posted his second-worst finish ever at Glory’s Last Shot (T-39) in 2003 and didn’t break par in four rounds, but he sounded surprisingly upbeat.

“Oak Hill is one of the more difficult golf courses,” he said. “It’s straight out in front of you; it’s very, very difficult.”