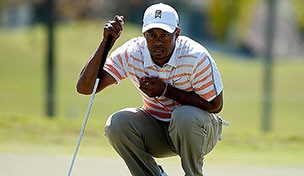 DORAL, Fla. – Tiger Woods set a personal-best with 17 birdies over two rounds on the Blue Monster. What mattered more to him was a two-shot lead going into the weekend at the Cadillac Championship.

In a World Golf Championship with golf's biggest names in the hunt, Woods began to pull away with six birdies in an eight-hole stretch around the turn in a clean, crisp exhibition Friday at Doral. That sent him to a 7-under 65, two shots clear of former U.S. Open champion Graeme McDowell, who had a 67.

All it took was one shot for Woods.

After a scrappy session on the range, and failing to birdie the easy opening hole, Woods laced a 4-iron on the 239-yard fourth hole that caught ridge and rolled to tap-in range. His big run ended with another 4-iron, high and soft, on the 224-yard 13th hole.

Those par 3s ranked as the toughest two holes in the second round, and he birdied them both.

The 17 birdies beat his previous best of 16 birdies in the 1999 Byron Nelson Classic. Asked what that meant, Woods smiled and replied, ''It left me a two-shot lead.''

A birdie-birdie finish by McDowell prevented a dream final group for the weekend at Doral – Woods and longtime nemesis Phil Mickelson.

Mickelson, sparked by a visit to Augusta National earlier in the week, hit a 9-iron that stopped inches from dropping for a hole-in-one on the par-3 ninth. He had a 67 and was three shots behind, along with Steve Stricker (67).

Rory McIlroy showed signs of turning the corner with a 69, although he ended with a sloppy three-putt bogey. It was his first round under par this year, a small consolation for the world's No. 1 player. He was still 11 shots behind Woods.

Woods, who once owned these WGCs, has not won the last 10 he's played. But after a key putting tip from Stricker on Wednesday afternoon, Woods looks as comfortable as ever on a Blue Monster course where he has won three times.

The toughest part of the weekend might be the Blue Monster.

The greens already are firm and crusty under a week of sunshine and dry air. Woods, McDowell and most everyone else expects it to only get worse.

''I guess they can let this place go since they're going to tear it up on Monday,'' McDowell said.

Donald Trump, who bought the resort a year ago, plans a big makeover on the Blue Monster with construction to start right after the tournament. If that's the case, it could be reminiscent of Bay Hill a year ago, where Woods outlasted McDowell on the final day.

''It basically was a U.S. Open that broke out in Orlando,'' Woods said. ''We don't get too many opportunities where the weather cooperates, where they can push the golf course to a point where it's pretty tough like that.''

Not that he would mind. Woods has thrived on the toughest courses over the years, one reason he has 14 majors.

More fun is being atop the leaderboard, especially on a course where Woods has a history of winning. He has a 35-10 record when he has at least a share of the 36-hole lead, though he is only 2-2 in the last year. Those events he failed to win were the U.S. Open and PGA Championship.

The star from Northern Ireland this year has been McDowell, who won the World Challenge at the end of last year at Sherwood and hasn't missed much of a beat since returning from a 10-week break. He lost in the quarterfinals of the Match Play Championship, and tied for ninth in the Honda Classic.

Making up a two-shot deficit to Woods is never easy, though McDowell holds one distinction. He is the only player to make up more than two shots to Woods in the final round, rallying from four down at Sherwood in 2010.

''Tomorrow is not about winning the golf tournament. Tomorrow is about maintaining position, maintaining the way I'm playing and trying to give myself a chance come Sunday afternoon,'' McDowell said. ''It doesn't really matter who I'm playing with tomorrow. Tiger always brings his own interesting little circus inside the ropes. But like I say, I've been there many times and I always look forward to playing with him.

''And he certainly looks like if you can finish one ahead of him this weekend, it looks like you'll do OK here.''

McDowell didn't mind finishing ahead of Mickelson on this day, a small motivation. He looked at a leaderboard filled with so many big names, and he couldn't help but notice the four-time major champion making a move.

''I saw Phil sneaking up the leaderboard there behind me and I said, 'Let's spoil this part tomorrow.' I'm sure they would have liked Tiger and Phil in the last group tomorrow, but I certainly will enjoy the position of being in the last group. That's where I want to be.''

Mickelson will play with Stricker.

Masters champion Bubba Watson recovered from a shaky back nine for a 69 and was at 9-under 135 with Freddie Jacobson (69). Former Masters champion Charl Schwartzel also had a 65 and was five shots behind, along with former PGA champion Keegan Bradley, who had a 68.

Mickelson also wanted in that last group with Woods, especially with his track record against him over the last five years. He was happy with his game, though, coming off a two-week break, with a detour to Augusta.

''There's something very spiritual about playing Augusta if you love the game as much as I do, and going there gets me fired up,'' Mickelson said.