Woods makes a splash in Honda Classic first round 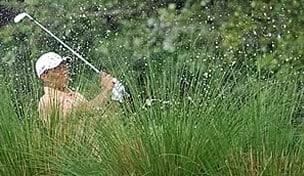 PALM BEACH GARDENS, Fla. – It isn’t often that Tiger Woods opens with an even-par 70 in a regular PGA Tour event and leaves us with an enduring, entertaining memory from his round. Then again, it isn’t often that he removes clothing to blast a shot from a water hazard.

It all started on the tee box of the par-4 sixth hole, playing to 437 yards on Thursday. Woods elected to hit driver, aiming down the left side to play a cut that would fade back to the fairway. He instantly knew it wouldn’t happen. The ball started left and stayed there. By the time it landed, Woods had slammed his club against the ground in disgust.

With a hazard bordering the hole’s left side, Woods believed he would find his ball engulfed somewhere in the muck – either unplayable or unfindable. Not exactly two optimal options.

Photo gallery: Woods' trouble at No. 6

“We didn’t know,” said his caddie, Joe LaCava. “We were just going to see where we could drop, then we were pleasantly surprised that it was hittable. So we got away with it.”

It was hittable, yes, but not without some work. As a right-handed player, Woods would have to get even deeper into the hazard to have a swing at it. He examined the lie for a good two or three minutes, then starting preparing.

Evoking memories of Jean Van de Velde, he first removed his shoes. Then his socks. Then he rolled the ends of his pantlegs into calf-high cuffs, covering them by sliding on a pair of rainpants. And finally he removed his cream-colored sweater. Because apparently even if you’re Tiger Woods and have millions of dollars in the bank and unlimited access to cream-colored sweaters, you still don’t want to get the one you’re wearing splotched with mud.

Once his wardrobe was set, Woods grabbed his 9-iron and climbed into the hazard. Standing barefoot, he took a mighty hack at the ball. A huge splash emerged from the water. Then the ball, which drifted effortlessly and safely into the fairway.

Woods casually toweled off his feet, removed his rainpants, uncuffed his pantlegs, put his shoes and socks back on and pulled his cream-colored sweater over his head again.

Of course, the entire episode would have been more forgettable if not for what happened next.

From 81 yards in the middle of the fairway, he hit a 60-degree wedge to 8 feet below the hole. He then made the putt to save par. For a guy who has made a career out of saving par – he’s done it at major championships; he’s done it to win tournaments – this one may very well rank amongst the best of the bunch.

“I was 1 over at the time,” Woods said of what was his 15th hole of the day. “If that ball is not playable from where it's at, where I caught was pretty far back and I would have had to have dropped. I couldn't even get an angle in the first cut and had to drop in the primary and had to lay up. Looking at a 6 – 3 over, and all of a sudden I flip it. Make par there.”

It wasn’t the first time Woods had to hit one out of the wet stuff. Five years ago, a fan found a glitch in the Tiger Woods PGA Tour 09 video game that would enable virtual golfers on a specific hole to walk on water, something the fan called a “Jesus Shot.”

So two days after winning the 2008 U.S. Open despite a debilitating leg injury that would need surgery and sideline him for the remainder of the season, Woods met with EA Sports staffers to shoot a promotional YouTube video showing that it wasn’t a fluke.

Filmed off the seventh hole on the North Course at Grand Cypress Golf Club in Orlando on a lake that no longer exists, a hobbling Woods cautiously recreated the video-game shot in a clip that now has close to 7 million views online.

“We pointed out that Tiger can walk on water,” said EA Sports marketing director Craig Evans. “He was a trouper.”

Walking on water may not have been easy, but at least Woods was allowed to go home after that shot. On Thursday, his blast from the hazard and resulting par still left him with three holes to play. Making the shot even sweeter was the fact that he made birdie on the par-3 seventh to get back to even par for the first time all day. With pars on each of the last two holes, he had saved a round of 70 that could have been much worse – especially if that drive on No. 6 was found submerged, as he had believed.

Instead, those few minutes – from finding his ball to removing some clothes to hitting the fairway to saving par – may have saved two or three strokes. And they just may have saved Woods’ title hopes in the process.