Woods opens with 69 at steamy Kiawah 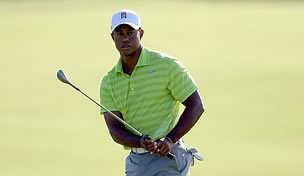 KIAWAH ISLAND, S.C. – On a sweltering day when he poured sweat just standing still, when he was more errant off the tee with his 3-wood than his driver, Tiger Woods was more than content with a 3-under 69 Thursday that left him three shots back of the early lead in the 94th PGA Championship.

With the temperature hovering around 90 degrees and the humidity thoroughly soaking his shirt and slacks, even before he teed off, Woods carded six birdies on Kiawah Island’s Ocean Course to sit in a tie for eighth after the morning wave. Carl Pettersson shot 66, and world No. 3 Rory McIlroy and Gary Woodland were at 67.

With crisp iron shots and a rejuvenated putter, Woods showed the kind of form he displayed late last week at Firestone, where he shot 68-66 on the weekend to sneak into the top 10 (T-8). Starting on the more difficult back nine at Kiawah, Woods made three consecutive birdies around the turn to vault up the leaderboard. After a smooth 8-iron on the par-3 eighth – his 17th of the day – Woods rolled in a 6-foot birdie putt, then made a tidy up-and-down on the last to post 69. It was his best score in the PGA Championship since his opening round at Hazeltine in 2009.

“It’s one of those days where everyone was going to shoot 6, 7, 8 under par, but the wind kicked up a little bit and it changed things quite a bit,” Woods said.

The wind is expected to blow even harder in the afternoon, giving those who teed off in benign conditions early Thursday a nice head start.