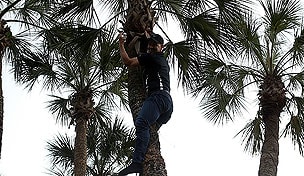 Getty Images
VIRGINIA WATER, ENGLAND - MAY 18: Lee Westwood of England is presented with the Players' Player Award by Padraig Harrington (R) of Ireland during the 2010 Tour Dinner prior to the BMW PGA Championship on the West Course at Wentworth on May 18, 2010 in Virginia Water, England. (Photo by Andrew Redington/Getty Images)  -

DORAL, Fla. – When Tiger Woods’ tee shot sailed into a palm tree on the 17th hole Saturday at the WGC-Cadillac Championship, it never fell to the ground. Woods appeared to put a good swing on the ball and most thought it meant the end result would be a ball in the middle of the fairway.

That was not the case.

Television cameras identified the tree, and were even able to zoom in to show the ball to viewers. But Woods still needed to identify the ball himself. If he couldn’t he would have to take a one-shot penalty for a lost ball and go back to the tee box. If he could identify it, he’d take a one-stroke unplayable-lie penalty and drop the ball right there.

He did the latter.

“It got to a point where I was probably about, maybe 60 yards away and I could see the ball in the tree,” Woods said. “Identified it with binoculars and saw my line on the ball.”

Woods mentioned how bizarre the last two weeks have been. He had two lost-ball situations last week at the Honda Classic at PGA National.

This time Woods hit the ball onto the back of the green and two-putted for bogey.