Woods tries to close in on Nicklaus' major mark at Olympic 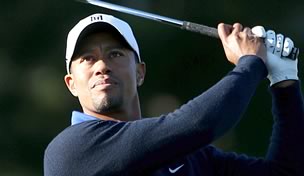 Woods will be looking to change that at The Olympic Club this week, to renew the greatest chase in golf’s storied history, his pursuit of Jack Nicklaus’ record for major championship titles.

Here’s the funny thing, though. While 15 majors have passed since Woods won his last, he would still be two years ahead of Nicklaus' pace with a win this week.

If the clock is ticking on Woods’ quest, he isn’t hearing it.

With his game looking honed and his confidence high after he won the Memorial two weeks ago, Woods arrives here with more than momentum on his side. He arrives excited about the test Olympic offers. He arrives seeing creative challenges that suit him as he bids to win his first major championship since claiming the U.S. Open at Torrey Pines in 2008.

“I think this probably tests the player more than any other championship,” Woods said. “We have to shape the ball. We have to hit the ball high. We have to hit the ball low. Our short game has got to be dialed in. The only thing that's different from other U.S. Opens, in the past, it was always, miss the green, automatic lob wedge. Now, with some of these runoff areas, we can play bump and runs. We can play skip shots. We could flop it if we wanted to. We have different options. So I think what [U.S. Golf Association executive Mike Davis] has done has been remarkable at testing us.”

Fast and firm setups, that’s what Woods says he likes. He’ll get one this week.

“It’s going to be a wonderful test. I'm excited about playing, excited about this golf course. I've played a lot here in college, and it's great to be back.”

Woods was asked if he was “back” in the larger sense, or if he needed to win another major to prove he is “back.”

“Even if I do win a major championship, it will still be, `You're not to 18 yet.’ Or `When will you get to 19?’ It's always something with you guys,” he said to the media. “I've dealt with that my entire career, ever since I was an amateur and playing all the way through and to professional golf, it hasn't changed.”

Woods tied for 18th when he played the U.S. Open at Olympic in ’98. He left frustrated, a feeling he says he has taken out of a lot of U.S. Opens. Woods was working through a swing change back then. He’s working through another one now, but with three victories in six months, he is further along with the change than he was here in ‘98.

Woods played his practice round Tuesday with a former Stanford teammate, Casey Martin. It was a relaxed, comfortable setting. That will change come Thursday and Friday with Woods being paired with Phil Mickelson and Bubba Watson.

There won’t be as much light-hearted banter as there was with Martin.

“I don't think we're going to talk about a lot,” Woods said. “This is a major championship. We've got work to do. Any extra motivation?  No.  I'm just trying to get out there and position myself for Sunday. This is a long grind. It's such a test playing in this championship. I think this is one of those championships that I think the guys talk the least to one another because it's so difficult.”