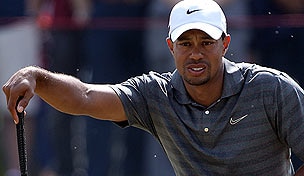 SAN DIEGO – U.S. Golf Association executive director Mike Davis will have an important ally in the audience Tuesday when he explains the proposed ban on anchored strokes to PGA Tour pros in the year’s first players’ meeting at Torrey Pines.

Tiger Woods reiterated his support for the proposed ban, which is actually not a ban as much as it is a new definition in what is a proper stroke.

“Generally, in the past, if guys switch methods, it's usually because they're uneasy, they're a little twitchy, or just don't feel comfortable,” Woods said. “But we have a whole other generation that has never experienced having those twitches, or having any of those types of problems, and they've grown up with anchoring the putter.

“I think that's what Mike was trying to explain when he was trying to implement this new rule, is that we're getting a whole other generation that have only putted with anchoring the putter, and they've just learned that one method. He believes every club should actually swing, and I agree with that.”