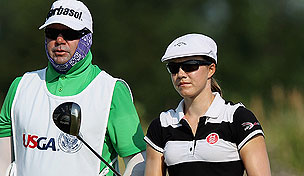 Getty Images
AVONDALE, LA - APRIL 24: Charles Howell III waves to the group behind him after two golfers drove the Par-4 13th green while Howell was waiting to putt during the second round of the Zurich Classic at TPC Louisiana on April 24, 2009 in Avondale, Louisiana. (Photo by Dave Martin/Getty Images)  -

That’s what folks tell her.

Hurst, whose 2-under-par 70 at the U.S. Women's Open Friday moved her into a tie for fourth just two shots off the lead, was born after her mother’s water broke while her mother was playing golf at Andrews Air Force Base in Maryland.

“Her water broke on the 16th hole,” Hurst said. “I was born a couple hours later.”

“I have to pretty much take it all in when I'm walking up 18 and seeing myself at the top of the leaderboard,” Hurst said. “It's really cool, especially this being the Women's Open.”