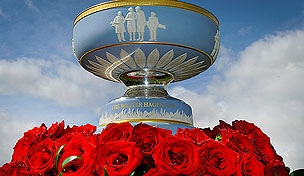 With several of the biggest names already eliminated at the WGC-Accenture Match Play Championship - notably, both Rory McIlroy and Tiger Woods - the 32 remaining participants teed it up Friday in the second round. Check back here for recaps of matches as another 16 players will be sent packing from Dove Mountain Friday afternoon:

(10) Nicolas Colsaerts def. (2) Justin Rose, 4 and 2: In a matchup of Ryder Cup teammates from Medinah, the Belgian shook off an opening bogey to build a lead that he ultimately never relinquished. Colsaerts has now hit 28/30 greens in regulation through two matches, and played 16 holes Friday against Rose in 5 under.

(6) Matt Kuchar def. (3) Sergio Garcia, 2 and 1: Fifteen years after they met at the U.S. Amateur, Kuchar got a bit of revenge against Garcia, who beat him in that 1998 match. Though the proceedings remained tight throughout, Garcia was unable to hole mid-range putts down the stretch and an accurate approach to 17 sealed the win for the reigning Players champion.

(9) Robert Garrigus def. (1) Louis Oosthuizen, 3 and 2: With five front-nine birdies, Garrigus got out to an early lead for the second straight day. The former British Open champ attempted to rally from his deficit, but Garrigus never took his foot off the gas. After playing 16 holes in 6 under, he eliminated the last No. 1 seed left in this week's field.

(12) Fredrik Jacobson def. (13) Marcus Fraser, 4 and 3: The Swede won the first hole of the day against Fraser, and led the whole rest of the way. Jacobson held a 3-up advantage at the turn, and was never really threatened by the Australian, as Fraser failed to record a single birdie in 15 holes after shocking Keegan Bradley during the first round.

(15) Tim Clark def. (10) Thorbjorn Olesen, 3 and 2: After toppling Adam Scott Thursday, Clark kept up the momentum with a convincing win over the young Dane in the second round. The South African notched five birdies between holes 7-14, and Olesen never led at any point in the match despite playing his final six holes in 3 under.

(9) Scott Piercy def. (1) Luke Donald, 7 and 6: Some may have expected Piercy to play well Friday and perhaps win, but few if any expected such a romp. Piercy got out to a fast start, winning each of the first three holes and then holing a shot from 228 yards at No. 5 for a 4-up advantage. He played the first eight holes in 5 under, and Donald never really stood a chance.

(3) Ian Poulter def. (6) Bo Van Pelt, 3 and 1: Continuing to cement his standing as arguably the best match-play player around, Poulter held off a back-nine comeback effort from Van Pelt. The Englishman held a 4-up lead after 11, but Van Pelt birdied three of the next four holes to trim his deficit. Ultimately, though, it was too little too late, as the 2010 champion at Dove Mountain advanced.

(4) Steve Stricker def. (5) Nick Watney, 21 holes: In a match that featured stellar play from both participants, Stricker found a way to sneak by in extra holes. Watney was able to square the match with a birdie on No. 17 as both played the back nine in 4 under, and Stricker let a chance to end things slip away when a 5-foot birdie putt on the 20th hole missed right. An errant shot from Watney on the 21st ultimately decided things, as Stricker moves on to face Piercy.

(16) Shane Lowry def. (9) Carl Pettersson, 6 and 5: Those expecting a hangover effect for Lowry following his upset win over Rory McIlroy Thursday were sorely disappointed. The Irishman never trailed, and built a 4-up lead after wins on Nos. 6, 8 and 9. Pettersson, who won his first-round match in extra holes Friday morning over Rickie Fowler, wasn't able to keep pace with Lowry, who played the 13-hole match in 5 under.

(11) Jason Day def. (14) Russell Henley, 19 holes: In one of the more entertaining matches of the day, the Aussie advanced with a birdie on the first extra hole. Day held a 2-up lead with four holes remaining, but birdies from the upstart Henley on Nos. 15 and 18 forced extra holes.

(2) Bubba Watson def. (7) Jim Furyk, 22 holes: In the longest match so far this week, Watson appeared in control at multiple points. A 3-up lead after 10 holes evaporated, though, and The Masters champ missed short putts to close out the match on both the 18th and 19th holes. A bogey from Furyk on the fourth extra hole ended things, though, as Watson became the highest-ranked player to make the third round.

(5) Graeme McDowell def. (13) Alexander Noren, 20 holes: Perhaps the closest match of the day, neither competitor held more than a 1-up lead at any point. Noren grabbed control with a birdie on the 17th hole, but McDowell answered with a birdie on the next hole to send the match into overtime. After Noren's approach at the 20th hole found the desert, McDowell was able to survive and set up a Saturday match with Lowry.

(6) Hunter Mahan def. (14) Richard Sterne, 4 and 3: Mahan showed some of the form that helped him win this event a year ago, cruising past the South African and into the Round of 16. Sterne never led during the match, as Mahan won four straight holes from Nos. 10-13 to turn an otherwise close match into a convincing win.

(7) Martin Kaymer def. (15) Rafael Cabrera-Bello, 2 and 1: A runner-up here two years ago, Kaymer shook off a slow start to close out the Spaniard, who upset Lee Westwood on Thursday. With the match level through six holes, the German won three of the next five and was able to play defense down the back nine, ultimately closing out the match with an up-and-down from behind the 17th green.

(8) Gonzalo Fernandez-Castano def. (16) Charles Howell III, 6 and 5: Howell was unable to replicate the form that he used to knock out Tiger Woods in the first round, failing to make a birdie Friday during his 13-hole match. The Spaniard, who closed out his first-round match with Francesco Molinari earlier this morning, made five birdies across that same stretch to easily advance.

(4) Webb Simpson def. (5) Peter Hanson, 1 up: Neither player gave up much ground over the back nine, and although Hanson was staked to an early lead, Simpson was able to square the match on the 14th hole. After trading pars down the stretch, the reigning U.S. Open champ advanced thanks to a birdie on the home hole.