What We Learned: Tampa Bay Championship 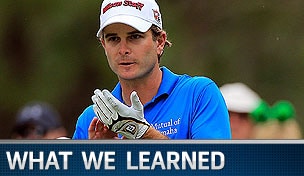 Each week, GolfChannel.com offers thoughts on 'what we learned' from the world of golf. This week, our writers weigh in on an 'Everyman' winning on the PGA Tour, an American ascending to the No. 1 world women's ranking, and an underrated gem of a Florida course.

As journalists, we root for the story – and there aren’t many better stories on the PGA Tour than that of Kevin Streelman. Think about it: Just 10 years ago, he was earning extra cash to play mini-tours by caddying at Whisper Rock GC, otherwise known as golf course-to-the-superstars. 'I was just trying to save up money and practice wherever I could,' he told me a few years ago. 'I'd be running around there in my jumpsuit, dodging rattlesnakes, trying to make a couple of hundred bucks each day.' He was less than five years removed from looping when he earned PGA Tour status through Q-School and he’s never looked back. But that doesn’t mean Streelman doesn’t remember the good ol’ days. In fact, it’s difficult to find a more grounded pro on the most elite level. I’ve witnessed him genuinely interested in the lives of pro-am partners and taking time away from practice sessions to greet those who reside well below his pay grade. That may not be saying much, but the simple fact that Streelman has retained everyman status even while climbing the PGA Tour ranks should enhance the story now that he’s a champion for the first time. – Jason Sobel

The American women’s game has its bright new beacon.

If becoming the first American in 18 years to win the LPGA Player of the Year award last season wasn’t convincing enough, Sunday’s ascension to No. 1 seals the deal. Stacy Lewis will become just the second American to rise to No. 1 when the new Rolex world rankings are out. She will join Cristie Kerr as the only USA players to hold the top spot. Lewis’ emergence is timely because there isn’t another American in the top 10 in the world. She gives the American game a dose of hope and inspiration. You can be sure all the other top Americans will be ratcheting up their games to try to catch Lewis. – Randall Mell

Once again, Innisbrook’s Copperhead Course proved it is the best Tour track in Florida, the most complete test. PGA National is manufactured difficulty, having been converted to a par 70 for tournament week. Doral routinely produces a high-quality winner – Tiger, for instance, has won four times there – but it also has the best field. Nothing about Bay Hill’s layout excites the rank and file, and TPC Sawgrass is viewed by some as gimmicky. But you’ll hear nothing but praise for Innisbrook, with its tree-lined fairways and complex greens. It remains a hidden gem on Tour, though hopefully not for long. – Ryan Lavner

The PGA Tour needs more variety. Consider that in consecutive years Innisbrook has delivered three vastly different champions – from bona fide bomber Gary Woodland (2011) and short-game specialist Luke Donald (2012) to endearing journeyman Kevin Streelman (2013). Unfortunately, there are far too few Innisbrooks on the circuit’s dance card. It seems the Tour is a fan of just one flavor. – Rex Hoggard