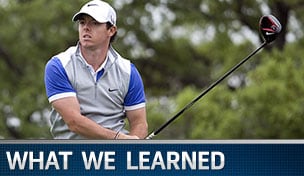 Each week, GolfChannel.com offers thoughts on 'what we learned' from the world of golf. This week, our writers weigh in on Rory McIlroy's second-place finish at the Texas Open before heading to the Masters and Inbee Park's hot putter that lead her to a Kraft Nabisco win.

So … lemme get this straight: The world’s best golfers often say they want their games to peak around each of the four major championships. But when Rory McIlroy’s game failed to peak before he needed it to peak, he was subject to ridicule and criticism? Can’t say I follow that line of thinking. It’s like a stockbroker only picking blue-chippers that have exceeded expectations over the past few months, rather than finding a few recent flat-liners that are ready to boom. McIlroy is a blue-chipper who has finally busted out of flat-liner status – and just in time. After three months of consternation and hand-wringing over the state of his game, a solo second place at the Valero Texas Open should once again have him on the short list of Masters contenders. More importantly, it will give him plenty of much-needed confidence heading to Augusta. Yes, he’s peaking at the exact right time. And isn’t that the whole plan in the first place? – Jason Sobel

With all the swing coaches, short-game coaches and mental coaches in the game, sometimes no coaching is the best way to go.

That’s the deal with Inbee Park.

The runaway Kraft Nabisco Championship winner is one of the best putters in the game, and nobody coaches her putting. Growing up, she said she taught herself how to putt. Through the junior, amateur and pro ranks, she worked with a swing coach, but they never worked on her putting. That's all Inbee's domain. The left-hand low stroke with her Odyssey Sabertooth putter is one of the most dangerous moves in women’s golf, and it’s all Inbee's creation. She has led the LPGA in putting per greens in regulation three of the last five seasons. – Randall Mell

Each player prepares for a major differently, and this year added an extra little wrinkle, with the Masters as late as possible. Tiger Woods took off the last two weeks after back-to-back wins. Adam Scott hasn't played in a month. Phil Mickelson wanted to play the week before Augusta, but so strongly disliked TPC San Antonio that he opted against it. Rory McIlroy added an event out of desperation. There is no perfect formula to prepare. But Jim Furyk said it best Sunday – he would have learned more with a missed cut in Texas than seven days at home. With an extra week between Bay Hill and Augusta this year, it'll be interesting to see whose strategy worked best. – Ryan Lavner