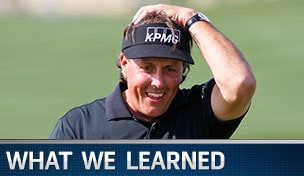 Each week, GolfChannel.com offers thoughts on 'what we learned' from the world of golf. This week, our writers weigh in on Phil Mickelson's wire-to-wire win in Phoenix and Vijay Singh's use of deer-antler spray.

I’ve been coming to the Waste Management Phoenix Open for the past six years and I always spend a decent amount of time at the famous 16th hole. I love the scene. From fans serenading players on the tee box to players handing out swag to the caddie races, it’s a fun atmosphere for one hole during one week each year. But it’s teetering on the brink. There’s a fine line between boisterous and unruly, and the festivities at 16 crossed that line at times. When the final group played the hole on Saturday, Keegan Bradley was nearly pelted by a flying banana and Phil Mickelson – yes, the same Phil Mickelson who is the crowd favorite and had just nearly made a hole-in-one – had a cup of ice hurled at him. There are rumors that Tiger Woods stopped coming to this event years ago after a similar incident and if these types of things continue, you can bet the list of elite players coming back will start dwindling. The problem is, there’s no way to police it without scaling back the full environment. The hole has become such a party that a few fans can spoil it for everyone – and it will be spoiled even further if actions such as these prevent some of the top players from returning to this tournament year after year. – Jason Sobel

Tiger may still be a TV exec’s best friend, and Rory may be tomorrow’s transcendent star, but there remains no better showman in golf than Phoenix Open winner Phil Mickelson. In a mere 96 hours in the Arizona desert, Lefty nearly shot 59, kissed his new driver, double-bogeyed the last hole to miss smashing a Tour record and came within 16 inches of making a hole-in-one on the most raucous hole on the Tour schedule, on a day that drew the biggest crowd in golf history. Along the way, he flashed more goofy grins and gave more thumbs-up than a slick-haired politician. Phil may be maddeningly inconsistent, but there is no debating that our sport is better when he excels. – Ryan Lavner

That something as comically clichéd as deer-antler spray would usher into golf the era of doping. With apologies to Doug Barron, the only player to ever be suspended for violating the PGA Tour’s anti-doping policy for taking testosterone and beta blockers that were prescribed by his doctors, it’s hard to imagine the forty-something was seeking a competitive advantage. Although it’s still dangerously early in the process for Vijay Singh, his use of the Ultimate Spray seems every bit an attempt at performance enhancement. – Rex Hoggard

Phil Mickelson isn't ready to get out of Rory McIlroy's way as the most compelling foil to Tiger Woods.

A week after Woods wins at Torrey Pines, Mickelson answers with a victory at TPC Scottsdale. It's an exciting development with the Masters just nine weeks away. Woods and Mickelson know how to win at Augusta National better than anyone playing today and this bodes well for folks who want to see a showdown there in April. If Woods is ready to win his 15th major, Mickelson looks ready to deny him. Can we speed up the clock? – Randall Mell

While a lot of talk this week has focused on Phil Mickelson’s impeccable driving with a new Callaway club in the bag, I was more impressed with Lefty’s mastery of the shortest holes at TPC Scottsdale.

Starting his week with birdies on each of the four par-3 holes Thursday en route to a sizzling round of 60, Mickelson ended up playing the par-3s this week in 9 under. When Brandt Snedeker began to put some heat on him early in Sunday’s final round, Lefty used a pair of well-timed birdies on each of the front-nine par-3s to pad his advantage and keep the rest of the field at arm’s length. His ability to make the occasional 60-footer through the fringe as he did today at No. 7 was remarkable, but my takeaway will be that most of his par-3 birdies came from iron shots that barely left the flag, as his proximity to hole stats were unrivaled all week. With the calendar turning to February and The Masters appearing ever-closer on the horizon, this week made me quickly remember that when Mickelson’s game is in a groove tee-to-green, few can keep pace –  let alone beat him. – Will Gray