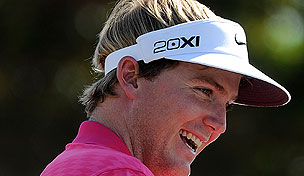 HONOLULU – Russell Henley's 24-under 256 was the second-lowest score for a 72-hole tournament in PGA Tour history, two shots behind Tommy Armour III in 2003 at the Texas Open.

It also broke by four shots the Sony Open scoring record set by John Huston in 1998 and matched by Brad Faxon in 2001. And that wasn't the only mark Henley left on Waialae Country Club. He set tournament records for the low 36-hole score after his 63-63 start, he shared the 54-hole record with Langley and set another tournament record with the lowest final round by a champion.

Henley finished with five straight birdies - only one of them inside 10 feet – for a 29 on the back nine and a 7-under 63, the lowest finish by a Sony Open winner.

The win allowed Henley to crack the top 50 in the world ranking, which should be enough to get him into the Match Play Championship for the top 64 in the world, with the qualifying date only a month away, and he should be set for the other WGC at Doral. The win qualifies him for Firestone in August, along with the PGA Championship.