Wind gets ridiculous at Hyundai 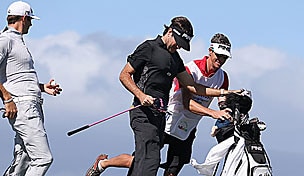 Let us review three days trapped in this space-time continuum.

This is how the 2013 PGA Tour season was supposed to begin: Rickie Fowler hits the opening tee shot of the Hyundai Tournament of Champions at 10:35 a.m. local time on Friday. And it did – only to be postponed because of heavy winds 131 minutes later and eventually wiped away altogether.

This is how the 2013 PGA Tour season was supposed to begin: After a one-day deferment, 30 winners from last year get the tournament back on track by playing 36 holes on Saturday. Except conditions were even worse, so after three straight one-hour delays, the entire day was canceled.

This is how the 2013 PGA Tour season was supposed to begin: Exactly 48 hours and 35 minutes after the initial opening tee time – and following what was already a four-hour delay on Sunday morning – the first round would finally get under way. But that lasted only 71 minutes before more gusting winds caused yet another suspension and yet another day that was completely wiped from the books.

We’ve seen a handful of Monday finishes over the years. Brace yourself for what is believed to be the first-ever Monday start.

Three days into the season, the season still hasn’t begun. Hollywood scriptwriters couldn’t come up with something this improbable, especially in a tropical locale renowned for its weather.

It isn’t for lack of trying. The brief period of golf that was played on Sunday was comically entertaining at best, downright embarrassing at worst and completely bizarre any which way you look at it.

There was Matt Kuchar, trying to start his season on the exposed 10th tee. Hatless – because it blew off twice during his pre-round range session – he watched his ball blow off the tee and needed to consult a rules official before even making a swing.

“I was told that it took me seven minutes to actually hit the ball,” he later said with a laugh.

There was Ben Curtis, hitting his first two greens in regulation – which only resulted in a double bogey-triple bogey start.

“I hit it 25-30 feet left of the pin and we were walking halfway down and my caddie said, ‘Hey, your ball is moving,’ and it rolled about another five feet,” he explained of his travails on the 11th. “I get over it for the third time and this time I see it's going to move and it started to move a foot, two feet, three feet and just started picking up pace and off the green it went, 25 feet or so.”

There was Charlie Beljan, who never even completed a hole.

“I hit two in the left garbage, because on my backswing the wind was hitting me 40 miles per hour,” he said. “Then I swung as hard as I could and the ball didn’t come out, then I hit a beautiful little shot onto the green and it rolled about 20 feet and all of a sudden, I’m waiting for Tommy [Gainey] to hit and my ball starts rolling to six feet from the hole.”

There was Scott Stallings, whose experience may sound unique, but was pretty common for this day.

“I drove it pretty close to the green on 12,” he maintained. “I putted it to about 10 feet. I missed the putt and went to tap it in, but it started rolling and I ended up having further for par than I did for birdie – and then my hat blew in the hazard!”

We’re now left with the chalk outline of a once prestigious tournament that has more than a little let’s-just-get-it-over-with-already feel to it.

Next up: Monday’s schedule is for 36 holes followed by 18 more on Tuesday, which would still render this an official – albeit shortened – event.

Slugger White, the PGA Tour’s vice president of rules and competition, sounded cautiously optimistic in expressing hope that this schedule could remain as planned, even though more wind is expected to blow through the Plantation Course.

“The forecast is a little bit better. We have got wind blowing out there about 48 miles an hour right now,” he explained Sunday afternoon. “It would be sustained [Monday] for probably 20, 25, gusting into the high 30s.”

For yet another day, 30 elite players will return to the course in hopes of finally getting started.

This is how the PGA Tour season is supposed to begin.