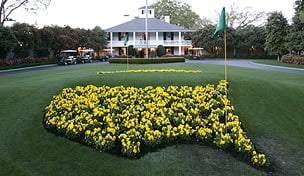 We've been waiting for this week (and next) all winter and it's finally here. Spring has sprung! On the PGA Tour it's the second of four Texas swing events but more importantly the last tournament before the Masters.

On the LPGA it's the first major of the year. So with major championships the focus of golfers throughout the world this week, we break down what's Hot before we take the drive down Magnolia Lane.

1. D.A. Points: He received one of the last invitations to the Masters with his win at the Shell Houston Open. Of course the victory is what's important, but I'd reckon the invite is almost as up there as the money he received (as well as the playing exemption) from the win.

2. Michael Jordan: This is his week as he gathers some forty-odd celebrities (myself included) to play in his 13th annual charity golf tournament. Held at Shadow Creek in Las Vegas, I'll be teeing it up with the likes of Michael Phelps, Chevy Chase, and Charlie Rymer's favorite, Adrian Young – the drummer from No Doubt. It's definitely a crazy and eclectic bunch! By the way, Dustin Johnson is doing his pre-Masters tune-up there as well … so it's not just all fun and games!

3. Valero Texas Open: Win and you're in! That's the motto this week for any player not yet invited to the Masters who is teeing it up at the Valero Texas Open. In the midst of March Madness, who doesn't love a Cinderella Story?! Those key names vying for entry include Charlie Beljan, Bud Cauley, Jordan Speith, and Cameron Tringale. My vote is Tringale.

4. Bubba Watson: Not only will he be defending his Masters title and hosting the Champions' Dinner next week, but he is in the news for bringing you the hovercraft golf cart in conjunction with Oakley.

5. Majors: This is the first major of the year – the Kraft Nabisco Championship – and the ladies are ready to pounce – or I should say jump. That Includes new world no. 1 Stacy Lewis who picked up her one and only major here two years ago.

6. Final Four: This past Sunday as the NCAA tournament was whittled down to the Final Four, four players made the invitation list to the 2013 Masters. Henrik Stenson, Freddie Jacobson and Richard Sterne joined D.A. Points in the Augusta field by getting inside the top-50 in the world rankings.

7. Dufnering: This trend is still running strong after Jason Dufner unintentionally made headlines and created a social media frenzy after relaxing in a very bizarre pose during an event for the Byron Nelson Championship. Dufnering photos have been taken through the world, including at the Taj Mahal in India.

8. Holly Sonders: Major props to my co-worker who definitely deserves a nod on the Hot List this week for her photos in Golf Digest magazine. Just take a look. Enough said.

9. Sean Foley: It's been a good season to say the least for the players in Foley's stable, including not only Tiger Woods, but Justin Rose who finished runner-up to the world's new No. 1 player at Bay Hill. If you're debating between favorites at the Masters, I'd take someone on Team Foley.

10. Ian Poulter: The marketing machine is my dark horse to beat at Augusta (along with Adam Scott) and his company IJP Designs has come out with limited edition putter head covers for the year's first major. Masters green adorned with azaleas, does it get any more iconic than that?