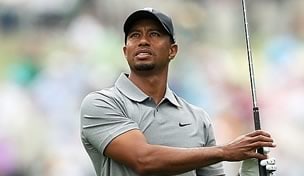 AUGUSTA, Ga. – Tiger Woods shot 2-under 34 on the first nine holes of the Masters as he began his search for a fifth green jacket at Augusta National.

Woods did not play particularly well the first five holes but managed par on them all. Birdies on Nos. 6 and 8 settled him nicely before he made the turn. Marc Leishman shot 66 and is the leader in the clubhouse.

The biggest news of the day for Woods was that his new girlfriend, Lindsey Vonn, was in the gallery. Vonn (click here to learn more about the Olympic skier) was dressed in a sundress and hat and was walking with a noticeable limp.