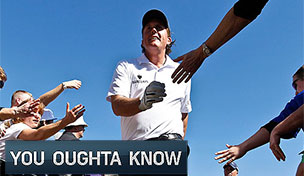 After his opening-round 11-under 60, Phil Mickelson has set himself up to win this year's Waste Management Phoenix Open. Here are some things You Oughta Know heading into the final round:

• After tying the event's 54-hole record Saturday, Mickelson will have further history in his sights during the final round. He needs a 5-under 66 Sunday to break the tournament's 72-hole record of 28-under 256, set by Mark Calcavecchia in 2001, while a 7-under 64 will establish a new all-time 72-hole mark on the PGA Tour, currently held by Tommy Armour III from the 2003 Valero Texas Open.

• With a six-shot lead entering the final round, Mickelson appears likely to conclude a wire-to-wire victory Sunday afternoon. The last player to win in Phoenix having led at the end of each round was former U.S. Open champion Steve Jones, who led wire-to-wire while winning in 1997 by a whopping 11-stroke margin over Jesper Parnevik.

• Mickelson's lead appears commanding, but the most recent precedent for his current margin over the field is not exactly encouraging. The last player to carry a six-shot lead into the final round of a PGA Tour event was Spencer Levin, who like Mickelson led by six heading into the final round at TPC Scottsdale a year ago. After a 4-over 75 Sunday, though, Levin ended up in third place, two shots behind eventual winner Kyle Stanley.

• Though Mickelson seems unlikely to slow down, Brandt Snedeker has experience coming from well back on Sunday to win. The reigning FedEx Cup champion was seven shots back entering the final round at the 2012 Farmers Insurance Open, six shots off the pace at the 2011 RBC Heritage and five shots behind with 18 holes to play at the 2007 Wyndham Championship - and left with trophy in hand all three times.