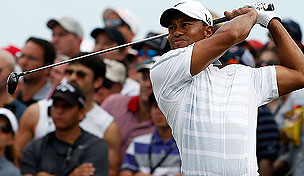 DORAL, Fla. – The game’s best front-runner has a huge lead heading into the final round of the WGC-Cadillac Championship. Tiger Woods has collected 24 birdies over the first 54 holes (both career bests on the PGA Tour) and is four shots ahead of Graeme McDowell, five ahead of Phil Mickelson and Steve Stricker.

Here are some things You Oughta Know on the eve of what seems like a coronation ceremony for Woods and his 76th career PGA Tour victory:

• A victory Sunday would be Woods’ 17th World Golf Championship title. He has not won a WGC event since the 2009 Bridgestone Invitational. From 1999-2009, Woods didn’t go a season without winning at least one WGC title.

• The third-round leader or co-leader has carried the lead to victory five of seven times this season. Michael Thompson did so last week at the Honda Classic.

• Woods’ opening 198 total after three rounds is the best at this event since it moved to Doral in 2007. Bubba Watson had the previous low of 199 last year, but failed to win the tournament. Justin Rose came from three behind to win.

• McDowell missed a 6-foot putt on the 11th hole to record his first bogey of the week. His 46 consecutive holes without a bogey is the longest streak of his PGA Tour career.

• McDowell and Woods were paired together in the final round of the 2012 Arnold Palmer Invitational, which Woods ultimately won.

• The largest come-from-behind victory of Mickelson’s career is six strokes, at the 2000 Colonial and the 2012 AT&T Pebble Beach National Pro-Am.

• Rory McIlroy had a six-hole stretch Saturday where he made five birdies. He shot 71 and enters the final round tied for 30th.