Younger players have the mental makeup to win now 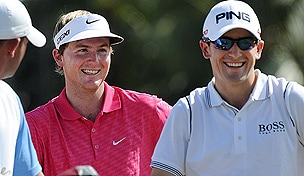 Charles Howell III is a congenial kind of guy, the type who appreciates the give and take of some playful banter. So when I saw him on the practice green at Waialae Country Club for the first time last Wednesday, it wasn't long after we exchanged Happy New Year greetings that I tried to give him a little grief.

The response floored me. I had picked a number large enough – or so I thought – that it would exaggerate his age for the sake of the joke. Do the math, though, and you'll find that, yes, it really has been that long since Howell first broke onto the scene with 13 starts back in 2000.

The conversation instantly reminded me of another one I had with him at the Sony Open. It was six years ago when Howell appeared primed to win this tournament, only to get lapped on the back nine by Paul Goydos. Afterward, he characteristically sat down and answered some tough questions, shouldering the blame for the defeat. But when I suggested that his loss was serving as a microcosm for the inadequacy of young American golfers, he chafed at the notion that there was even any issue.

'I think it's ridiculous' he said at the time. 'I think American golf under 30 is fine. If you look across the board, if you look at the guys playing nowadays, I don't buy into that, no.'

This despite the fact that only three American 20somethings had won the year before (J.B. Holmes, Troy Matteson and D.J. Trahan), only two owned multiple career victories (Ben Curtis and Jonathan Byrd) and only one was ranked in the world’s top 50 (Lucas Glover). It doesn’t take a golf historian to realize that despite a few major wins in that group, none of those players developed into a superstar.

The story is relevant today because we’ve seen a seismic shift in the early success of U.S.-born golfers. Dustin Johnson has won in each year since graduating college. Keegan Bradley and Webb Simpson are already major champions. And on seemingly a weekly basis, baby-faced kids who were carrying their bags in college tournaments not long ago are not only competing with the world’s best on the PGA Tour but contending for titles.

And winning them. Russell Henley is the latest – and maybe greatest – example of a player finding prosperity so soon after leaving campus. His final round at the Sony Open, one of three 63s he posted during the week, included five birdies to close. Ask the question of why times have changed so quickly and the simplest answer may be staring back from atop the leaderboard: Because they’re really talented.

That may be true, but it’s a copout. Just five-10 years ago, players coming out of college were really talented, too, yet the results weren’t nearly as immediate. So what’s the real reason? Ask Henley and he cites everything from the increasing competitiveness of junior golf to motivation from friends like Harris English, who kept his card after a strong rookie campaign last year.

“I think more guys want it,” Henley explained. “It's just getting more and more competitive. If everybody could just get out of their own way a little bit, including me a lot of time – the majority of the time – everybody could play some good golf out here. Everybody is very talented.”

He isn’t wrong about any of that, of course, though his answer serves as only a broad explanation. In fact, go back and read it again. If Howell had offered that comment back in 2005 as a reason for less success rather than Henley using it now as a reason for more, it still would have served that dual purpose.

As if to only further the point about young golfers making the jump to the most elite level, Scott Langley also contended throughout the weekend at Waialae. Like Henley, he is a 2011 college graduate – and like Henley, he never seemed like he was lost in the moment, even when his hot putter grew cold on Sunday.

“Guys are really good at every level – junior golf, amateur golf and mini-tours everywhere,” Langley reasoned when faced with the question. “I think the instruction is really good. That definitely helps. Guys are getting better technique younger. But then also I think as far as me and my peers, we've helped each other a lot, just push each other to be better.

“Our little group of guys has played together for 10 years probably. We just always kind of have tried to make each other better. If I see Russell playing really good, I want to play really good. I want to beat him. And same with if [fellow rookie] Luke Guthrie is playing great; I want to go out there and play well. We push each other, and I think we kind of feed off each other.”

We’re getting warmer. Quality players have always been around, but a higher quantity of quality players competing in the junior, amateur and collegiate ranks basically traveling the world as unpaid professionals speaks volumes as to why the comfort level comes more readily these days.

There’s more to it, though. Langley’s explanation could serve as to why more young players are faring well, but it doesn’t necessarily address why it’s collegians as opposed to elite international players who have often played five years of professional golf by the time they turn 23. For that, I asked someone who has not only witnessed the transformation firsthand. He prodded it along.

“We want guys who want a great education, but want to play professional golf when they get out,” said University of Illinois head coach Mike Small, who coached both Langley and Guthrie. “They're coming to get their games better. I think the mindset is that you should get that degree, but you might as well become as you good as you can at golf while you’re here.'

Now we’re getting somewhere. Small has a unique perspective in making the jump to the highest level thanks to his own background. He not only succeeded in reaching the PGA Tour, he failed at sustaining his time there, a contrast he sees as a benefit to his players.

“This isn't fun-and-games daycare. I treat them and train them like Tour players,” he added, acknowledging that such treatment has changed in recent years. “These players aren't scared anymore. The golf courses we play are harder; the coaches are expecting more.

“I want to win championships as much as anyone, but if you coach these guys and convince them they're not going to reach their peak until 35 or 40, they’re going to lose that dream when they’re 22 or 23. I want my guys to want to play on Tour someday. I'm not going to force them, but I want them to have that dream.”

Whether it’s Small at Illinois or Chris Haack – Henley’s coach at the University of Georgia, which is churning out Tour players annually – or any number of college coaches who have been at the forefront of such change, it’s the mindset being instilled in players from Day 1 on campus that is making the biggest impact. No longer are college golfers being warned to respect their elders and informed that – with a heaping dose of luck spooned on top of their talent – maybe they can someday succeed on the PGA Tour level.

Sure, we can credit equipment as a technical assistance to these players and specialized instructors as a physical aid. In sport’s ultimate mental pursuit, though, there are now greater concessions being made toward that part of the game, if not with specific mental gurus and psychologists, then at least with a nod toward the power of positive thinking.

College students are taught to dream big and though it’s been a gradual shift, college golfers are now taking that notion to an extreme level. It’s one that should only serve to feed off itself in coming years, too; just as Henley received motivation from English, kids still living in dorms right now are deriving inspiration from Henley’s victory, believing that if he can win right away, well, so can they.

Six years ago, when I explored this topic with Howell, his retort was, 'I think American golf under 30 is fine.” He probably wasn’t wrong about that, but “fine” turned out to be underwhelming. The impressive exploits of young, U.S.-born golfers recently easily exceeds “fine,” which is exactly what they’ve been taught for years.