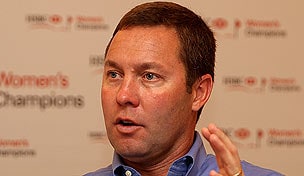 EVIAN-LES-BAINS, France – The Evian Masters in France will become the fifth major on the LPGA starting in 2013.

“In 2013 you will return to the fifth and final major on the LPGA,” commissioner Mike Whan (listen to Whan on 'Morning Drive') said Wednesday, adding that it’s “a new page in women’s golf history.”

Tournament chairman Franck Riboud said the tournament will be moved to the second week of September in 2013. The Evian Masters began in 1994, when Sweden’s Helen Alfredsson won the event.

“It will be the last one of the year, and we are very proud of that,” Riboud said.

“The Evian Masters has always been an elite tournament in the world of women’s golf,” 2007 U.S. Open champion Cristie Kerr said. “Players on the LPGA have always considered the Evian Masters on par with the best tour events in all of golf. As an LPGA major, Evian will continue, as it has always done, to reach new heights year after year.”

Field and qualifying criteria for 2013 has not been finalized, Whan said, adding that other majors - such as the Kraft Nabisco - are not under threat and there is no plan to remove one of them in the future.

“Kraft isn’t going away in 2013 and there is no hidden agenda,” Whan said. “Kraft Nabisco is going to be a time, a place on our schedule as long as I’m commissioner. The plan is to have five truly mega events.”

Modifications to the size of the Evian course and length of the holes will need to be made.

Riboud said refurbishment plans are scheduled to start in December, but that the tournament will be played as usual next year, before renovation continues in September 2012.

Riboud added that he hopes to make it “an organic golf course” by using very few fertilizers and taking advantage of Evian’s natural spring water.

“Nature friendly, with Evian’s nature,” he said. “We will not import something from the outside.”

Riboud added that Evian will strive to keep a unique, family-orientated atmosphere, despite its new status as a major.

“The thing we want is to keep the atmosphere,” Riboud said. “We want the Evian Masters to continue to be a real experience for everybody, not just the players but also the caddies. … We want to keep this as a family party.”