MAMARONECK, N.Y. -- Phil Mickelson's bid for a third consecutive major ended with a shocking collapse Sunday when he bungled his way to a double bogey on the final hole, giving the U.S. Open to Geoff Ogilvy.

The winning shot in this test of survival at Winged Foot was Ogilvy's 6-foot par putt that he figured was only good for second place.

The memory will be Mickelson on the 72nd hole, one minute on the verge of joining Tiger Woods as the only players over the last 50 years with three straight majors, the next minute looking like the Mickelson of old with a reckless attempt to get out of trouble.

Geoff Ogilvy waves to the crowd after his crucial par save on the 72nd hole.
The celebration took place not on the 18th green, but in the clubhouse.

Ogilvy, whose resiliency carried him to the Match Play Championship in February, closed with a 2-over 72 in the highest-scoring U.S. Open since 1974 at Winged Foot. He became the first Australian to win the U.S. Open since David Graham in 1981.

'I think I was the beneficiary of a little bit of charity,' Ogilvy said.

Ogilvy didn't just stand around waiting for handouts, though. The 29-year-old Aussie battled to the very end. He holed an 18-foot chip to save par on the 17th hole and then had to overcome a miserable break on the 18th when his tee shot landed in a divot. His approach lost power as it reached the green, tumbling down the slope. He chipped up and, unlike Colin Montgomerie and Jim Furyk before him, made the putt.

Even so, this was Mickelson's major to win, and the first one he threw away.

Instead of being linked with Woods in the majors, the comparisons turned to Jean Van de Velde at Carnoustie in 1999, when the Frenchman took triple bogey on the last hole of the British Open. But at least Van de Velde got a chance in a playoff.

Mickelson could only cup his hands over his cap and acknowledge a New York crowd that he disappointed again.

And he had only himself to blame.

He had a two-shot lead with four holes to play, but his stubborn side continued to hit driver, and his miscues finally caught up with him. Mickelson hit only two fairways in the final round, none on the back nine. And while he found a way to escape most times, Winged Foot got its vengeance at the end.

Mickelson's tee shot on the 18th went so far left that it clattered through the trees by a corporate hospitality tent, into the trampled rough. Instead of playing out to the fairway and trying to get par -- just as Payne Stewart and David Toms had done in beating Mickelson in majors -- he went after the green and hit a tree, the ball advancing only 25 yards.

The third shot sailed left of the green and buried in the bunker, plugged so badly that Mickelson had no chance to get close to the flag because the green ran away from him. He blasted out and through the green, into more rough, then chipped back 8 feet past the hole before making the last putt to close with double bogey.

Lost in the Mickelson collapse was what proved to be the most demanding U.S. Open in more than 25 years.

Ogilvy finished at 5-over 285, the first time a U.S. Open champion finished over par since Andy North at Cherry Hills in 1978. And it was the highest score by a winner since Hale Irwin won at 7-over 285 at Winged Foot in the '74 U.S. Open.

He also joined Irwin in another footnote that spoke to wicked Winged Foot -- neither failed to break par in any of the four rounds.

Irwin didn't get this kind of help, however.

'I had it right there in my hands, and I let it go,' Mickelson said. 'I just can't believe I did that.'

Mickelson wasn't the only guy to blow it on the 18th.

Montgomerie had his best chance in 11 years to win that elusive major. He holed a 75-foot birdie putt on the 17th hole for a share of the lead and was in the middle of the 18th fairway, 172 yards from the hole, in prime position to do no worse than a playoff. But he missed well to the right, down a steep slope into rough that covered the cuffs of his pants.

The best he could do was chip some 40 feet by the pin. Then he did the worst thing he could do, running his par putt 10 feet by and missing the next one for a double bogey and a 71.

'I look forward to coming back next year and try another U.S. Open disaster,' Montgomerie said.

Furyk also will have a restless night.

One of five players tied for the lead on a steamy afternoon, he was 5 over and in the bunker on the 18th when he played a splendid shot to about 5 feet below the hole. He backed off twice, and the par putt caught the right edge of the cup, giving him a 70, one shot out of a playoff.

'I played my heart out, and it didn't work,' Furyk said.

Padraig Harrington played bogey-free for 15 holes for a share of the lead, then bogeyed the last three for a 71 to finish fifth, two shots behind. Kenneth Ferrie of England was tied with Mickelson starting the final round and stayed with him for nine holes before he crashed to a 39 on the back nine and shot 76.

'I feel for Phil,' Ogilvy said. 'He's won a few majors recently, so I can take one away.'

He never imagined it would happen like this. No one did. Mickelson had been so dominant in the majors, and had poured so much into studying ever nook and cranny at Winged Foot, that it appeared he would win this the way Woods often captures majors -- making the fewest mistakes in the final round.

But he saved a whopper for the 72nd hole.

Ogilvy earned $1.225 million for his first major, and his third career victory on the PGA Tour, and it should be enough to put him into the top 10 in the world ranking.

He became the first Aussie to win a major since Greg Norman in the 1993 British Open, and Ogilvy showed he can never be counted out. When he won the Match Play Championship at La Costa, he set a record by winning four consecutive matches in extra holes.

This was about survival from the start, even if the New Yorkers were so raucous they thought Lefty only needed to show up.

But he still had to hit the shots, and Mickelson didn't hit a fairway until the eighth hole. The most damaging miss came on the par-5 fifth hole, easily reachable in two. Mickelson hit into the face of a bunker, hit into the rough, than tried to dig it out with a 4-wood and moved it about a yard. He did well to make bogey.

As the tournament headed into the final two hours, four players were tied top the leaderboard. It wasn't a matter of who would shift into drive, but who could get out of reverse.

Mickelson did both, but then stepped on the gas and drove over the edge. 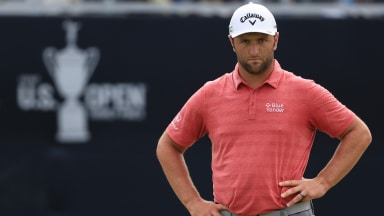 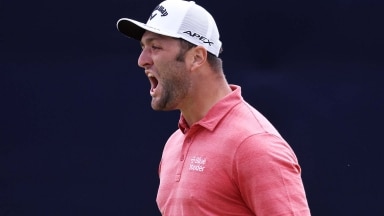 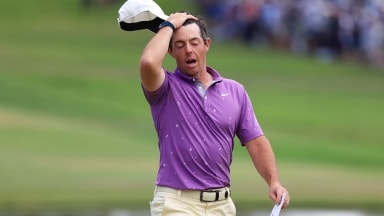