FORT WORTH, Texas -- Rory Sabbatini has a new plaid jacket to help him forget about all his near-misses.

Sabbatini won the Crowne Plaza Invitational at Colonial on Sunday, beating Jim Furyk and Bernhard Langer with a 15-foot birdie putt on the first hole of a playoff.

After beginning the final round tied at 11 under, Sabbatini, Furyk and the 49-year-old Langer closed with matching 3-under 67s to finish at 14 under.

All three hit their playoff drives into the fairway on the 433-yard 18th. Their approach shots all landed safely on the green.

Furyk, No. 3 in the world ranking and the only one of the top 12 players at Colonial, missed his 34-foot putt. Sabbatini then made his putt before Langer, with the shortest putt and a chance to force another hole, missed an 8-footer to the right.

It was the first three-man playoff ever at the Colonial, which hadn't needed extra holes since 1994 before Tim Herron won a two-hole playoff last year with Richard S. Johnson.

Tiger Woods had won the last three-man playoff on the PGA TOUR, beating Nathan Green and Jose Maria Olazabal at the Buick Invitational in January 2006.

Sabbatini finished the rain-delayed third round early Sunday with a 62, missing the tournament record by a stroke when his 8-foot birdie attempt scooted just left on No. 9, the last hole he played in the third round.

Scott Verplank also was tied for the lead going into the final round in his attempt to become the only player other than Ben Hogan to win Colonial and the Byron Nelson Championship in the same year. He closed with a 71 to tie for seventh.

Sabbatini got to 14 under when he made a 28-foot birdie at the 171-yard 13th, but there were plenty of other shots that almost went in during the final round.

At No. 9 for the second time Sunday, Sabbatini's 22-foot birdie attempt stopped just an inch short of going in. Out of a greenside bunker at the 611-yard 11th hole, he blasted his shot within 6 inches and had to settle for a tap-in birdie.

Sabbatini escaped trouble at No. 17 when hit his approach shot out of the thick rough onto the green for a two-putt par. On the final hole of regulation, he had a 19-foot birdie putt that curled away from the hole at the last second.

Now he gets a much-needed break, staying home in nearby Southlake instead of going to play in the Memorial. He had withdrawn from that tournament even before winning Colonial.

Sabbatini had a couple of weeks off after the Masters, but the Colonial was his fifth straight event. He was coming off a closing 73 at the AT&T Classic after finishing 44th at THE PLAYERS Championship.

Furyk got his first top-10 finish since three consecutive tournaments before the end of February. He tied for 13th at the Masters, but hasn't been better than 28th in any other tournament since, which allowed Phil Mickelson to leapfrog him in the world ranking after Mickelson won THE PLAYERS.

Langer, who had only one bogey in the 29 holes in regulation he played Sunday, regained a share of the lead when he hit his approach at the 382-yard 17th hole within 4 feet for a birdie.

His drive to the right at No. 18 then wound up in a tromped-down area of mud, though he got relief. His approach was still short of the green, but he saved par after his chip rolled within 3 feet of the cup.

Langer was trying to add the plaid jacket to the two green ones he won a long time ago. He hasn't won on the PGA TOUR since getting his second green jacket at Augusta in 1993, eight years after his first.

An eagle and three birdies in a late four-hole stretch at the end of his third round got him to the top of the leaderboard.

Divots:
David Toms got to 10 under when he had six straight birdies to matching the longest streak on the PGA TOUR this season -- set by Anthony Kim in the first round. But those were the only birdies for Toms. ... Tim Petrovic started the fourth round with three straight birdie putts of 26-29 feet. He went on to a round of 66 to tie for 12th at 271. He hadn't finished better than 23rd his first 14 tournaments. ... Defending champion Tim Herron was at 4-under 276 after weekend rounds of 70 and 71. ... Rod Pampling had a hole-in-one, using a 6-iron at the 189-yard 16th. Stripe your iron shots the way Boo does

Boo Weekley is one of the best iron players on the PGA Tour, as he showed in winning at Colonial on Sunday. How can you be a better iron player? 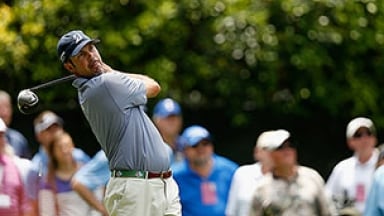 With a third-round 69, Matt Kuchar maintained a one-shot lead in the Crowne Plaza Invitational at Colonial Country Club in Fort Worth, Texas. With stormy skies halting play at Colonial, Matt Kuchar leads by one shot with three holes still left to complete his second round Saturday morning.