Woods' back incident a disturbing sight 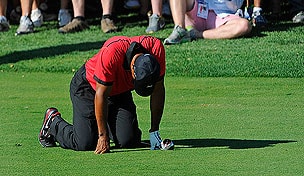 Getty Images
PONTE VEDRA BEACH, FL - MAY 12: Steve Stricker hits an approach shot on the seventh hole during the first round of THE PLAYERS Championship held at THE PLAYERS Stadium course at TPC Sawgrass on May 12, 2011 in Ponte Vedra Beach, Florida. (Photo by Mike Ehrmann/Getty Images)  -

JERSEY CITY, N.J. – Coming down the stretch on the back nine Sunday, Tiger Woods found the fairway at Liberty National’s par-5 13th for the first time all week.

He had birdied the hole in the second and third rounds of The Barclays despite hitting it in the right fairway bunker, but something about this tee shot felt different. Something about this day, this back nine and this found fairway felt special.

Just one shot off the lead after starting the day four back, Woods looked poised, in control and destined to mount a charge. He looked like the Tiger Woods of old.

Photos: Woods felled by back pain

Standing behind his ball, fairway wood in hand, Woods slowly arched his back and held the pose for a few seconds. It was one of the first times all day he had made such a move. He released the tension, walked up to the ball, drew his arms back and lashed downward.

The ball soared into the sky, but hooked left some 80 yards, eventually plopping down in a swampy area on the left side of the forward tee boxes of the adjacent 15th. Woods fell to his knees, then to all fours. Remaining down for several seconds, he no longer looked like the Tiger Woods of old, but rather, an old Tiger Woods.

That image of Woods brought to his knees may forever be tattooed in our minds as foreshadowing of what’s to come.

In 2008, we saw a then-32-year-old Woods limp his way around Torrey Pines for 91 holes, wincing and grimacing every step of the way. Defying logic and physiology, battling two stress fractures in his left knee, he somehow found the will to win the U.S. Open.

Woods’ injuries date back to his college years at Stanford, where he first had surgery as a freshman in 1994 to remove two benign tumors and scar tissue in his left knee. Since, he has had three additional surgeries on the left knee, trouble with his left knee's anterior cruciate ligament, stress fractures to his left tibia, a ruptured Achilles tendon in his right leg, joint inflammation in his neck, a minor sprain of medial collateral ligaments in his left knee, a minor strain of his left Achilles, a left elbow strain and the latest installment – an ailing back.

Of course, we don’t know the extent of Woods’ back troubles. At different junctures throughout the week at The Barclays, he said his back “starts off great every day and then it progressively deteriorates as the day goes on”; that the pain is “isolated”; that the previous week he felt “fine”; that his treatment after each round was “the same thing (he was) doing every night”; that his back was “definitely spasming”; and that whether he would tee it up at the second FedEx Cup Playoffs event was “all hypothetical right now.'

Those are all physical afflictions. There's also whatever psychological damage has been done by the scandal that erupted around him on Thanksgiving 2009.

Whatever his physical and mental condition, he isn't the player he once was. His scoring average on the weekend compared with the first two rounds at an event is miles worse post-scandal than it was before.

Couple the possible mental hurdles with the ever-growing number of injuries (and his latest swing changes under Sean Foley), and it’s not likely the game’s healthiest player – in terms of bringing in money and attention – will be healthy enough to chase down or catch the thing he wants most, Jack Nicklaus' record of 18 majors.

Woods will win again, will break Sam Snead’s all-time PGA Tour wins record and will even win another major. But, just as I conjure the image of Woods dropping to his knees at the 13th hole Sunday, this latest back injury probably isn’t the last notation on Woods’ medical file.