Maybe U.S. Ryder Cup team has too much leadership 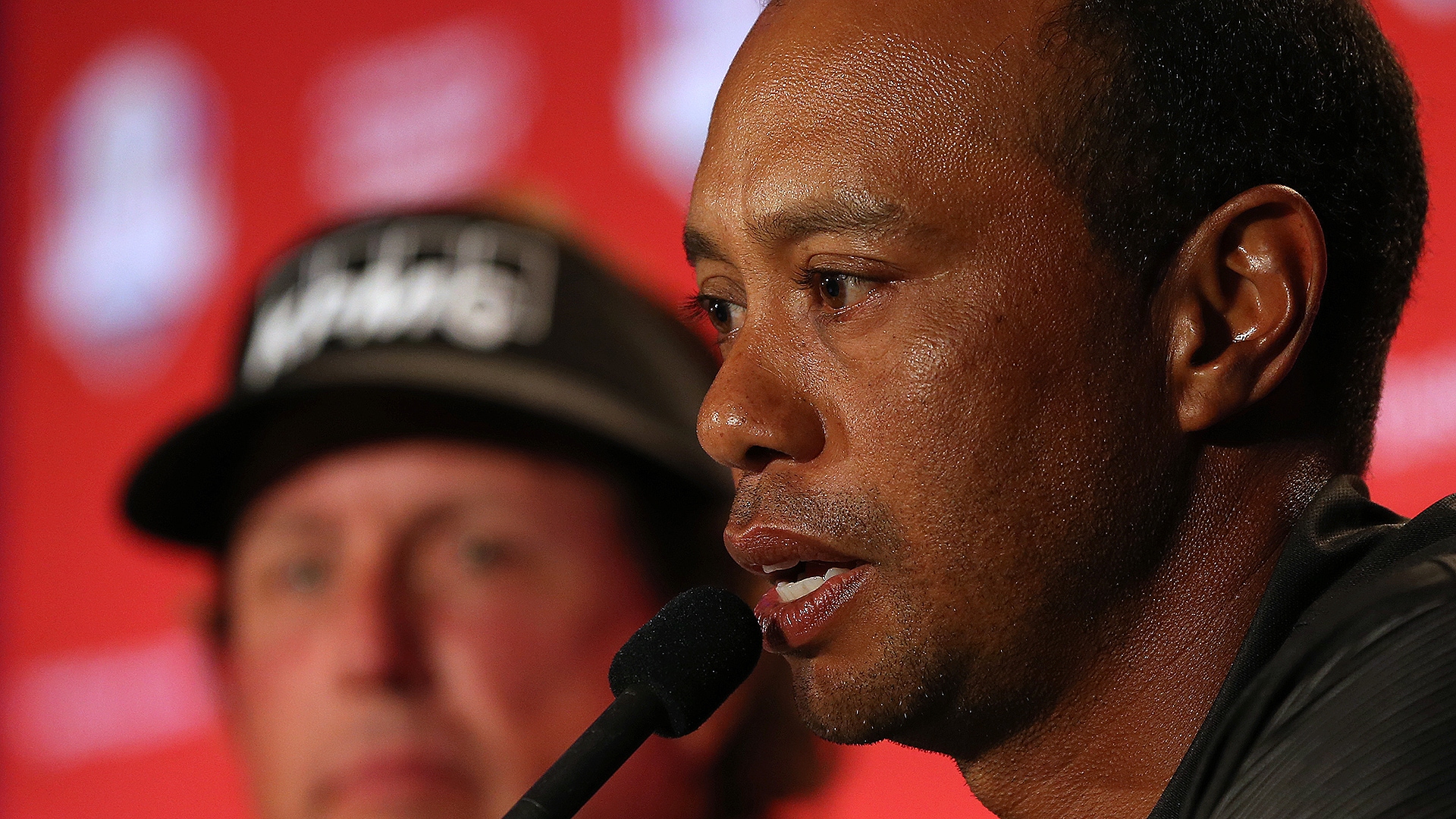 In the annals of mistaken predictions, Wired magazine’s challenge to Apple in 1997 to “Admit it, you’re out of the hardware game” might be worth downloading on your iPhone to remind you the next time someone gives you a sure bet, or in this case a sure loser. In the past 17 NFL seasons exactly two teams that were predicted to win it all went on to win the Super Bowl. From 1979-2014, 13 horses won the first two legs of the Triple Crown and every one of them from Spectacular Bid to California Chrome either failed to win or didn’t even start at the Belmont. All would have been favorites to win—which brings us to the United States and the Ryder Cup.

Yes, I know the USA won the Ryder Cup in 2016, but the Americans haven’t won on foreign soil since 1993, so what is the likelihood that Paris will be any different from Spain, England, Ireland, Wales or Scotland?

I have been told, mostly by those defending the losses of the U.S. teams, mind you, that match play is unpredictable, that on any given day anyone can win.

A fair point. After all, Brian Barnes did beat Jack Nicklaus twice in one day at the Ryder Cup.

But a closer look at the career Ryder Cup records of both men – Nicklaus, 17-8-3; Barnes, 10-14-1 – it’s obvious that, just as in medal play, over time the best players will win more often regardless of the format.

Tiger Woods’ singles match play record (Ryder Cup, Presidents Cup, WGC Match Play, etc.) as a pro is 50-16-2. Add what he did as an amateur, winning six USGA match-play events in a row -- three U.S. Juniors and three U.S. Amateurs -- the argument that match play is unpredictable becomes less convincing. Indeed, by any definition the best match-play players of all time would include Woods, Nicklaus and Bobby Jones, who could easily be supported as the best medal-play players of all time as well.

Over time, the unpredictability of match play washes away to insignificance.

Only 12 of the 28 points up for grabs at the Ryder Cup involve singles matches. The other 16 are contested in team-play events. To understand the nature of that format, we must go beyond the obvious factors of world rankings and who is home or away and into the very nature of group dynamics, which it seems to me is what the Ryder Cup is really about.

In the February 2016 issue of the Journal of Personality and Social Psychology, researchers reported what happens when groups of leaders are put together to collaborate.

The results were about as pretty as, well, the United States’ Ryder Cup record since 1995.

In one experiment, six people were divided into three pairs. One person in each pair was told they were the leader and given complete control of a task in which they were to build a tower out of toothpicks and candy. The leaders were told to make all of the group’s decisions and even determine how much money was to be divided among them should their group design the highest tower. A control group, with no power manipulation, also took part.

After this task was completed, the six people were divided into two groups with all three of the leaders in one group and all three of the followers in another group. They were assigned the creative task of designing a business. Independent judges rated the creativity and the interaction of the various groups. The control group and the followers’ group generated more creative ideas than the leaders’ group, which had more conflicts and proved less likely to work with each other and share ideas. More tests followed, with similar results.

The research suggests that while leaders are very good at learning how to influence others, they are less likely to learn how to follow. As a result, when groups of leaders get together they may have difficulty in coordinating their activity.

University of Texas professor Paul Woodruff, a classics scholar whose knowledge of the ancient world and military background influence his classes on leadership, often lectures about the problems that occurred as far back as recorded history among groups and armies when there were too many leaders. It is necessary, he argues, especially in this era where the assumption is that everyone should strive to be a leader, that leaders also know when to follow to optimize the potential of a group.

Professor Woodruff often makes the analogy that today’s business world is not unlike the story in Greek mythology where Agamemnon struggled for years with how to best manage the Greek heroes Achilles, Ajax and Odysseus, who fought for him against the Trojan army. Is it merely a coincidence that Odysseus finally conceived of the Trojan horse and the Greeks defeated the Trojans, after Achilles and Ajax had died?

As Professor Woodruff would say, there is only one corner office and only one No. 1.

Tiger Woods has been the No. 1 player in the world for an astonishing period of 683 weeks. Phil Mickelson, though he never ascended to No. 1, has been the second-ranked player in the world a record 270 weeks. Additionally, Phil has been in the top 20 in the world rankings 1,085 weeks, a staggering period of 20 years and 10 months—more than twice the time of the Greek and Trojan war if you are keeping count, and 2 1/2 years longer than Tiger has spent in the top 20.

Quite clearly, Tiger and Phil have been the dominant forces in the world of golf over the last 20 or so years.

Except at the Ryder Cup.

Since 1979, the year the Ryder Cup first became a competition between the United States and Europe, six men from either the U.S. or Europe have won four or more majors: Woods, Mickelson, Tom Watson, Seve Ballesteros, Nick Faldo and Rory Mcilroy. Their Ryder Cup records are as follows:

Perhaps it’s a coincidence that the only two players that have losing records in the Ryder Cup are Tiger Woods and Phil Mickelson. Perhaps too it’s a coincidence that Tiger and Phil have played on seven Ryder Cup teams together and those teams have lost six times, with their only win coming in the most unlikely of comebacks at Brookline in 1999. It is worth noting that the average world ranking of the seven teams that Tiger and Phil have played on together have been almost twice as good as Europe’s, but those U.S. teams have been outscored, 109 1/2 to 84 1/2 points.

The week before the Ryder Cup in 2002, during the WGC-American Express event, Tiger was asked which event was more important to him, the WGC or the Ryder Cup. The WGC, he said. When asked why, he said flatly, “I can think of a million reasons,” which was the exact number of dollars he won that week. That same week he was asked if, because of the formalities at the Ryder Cup, multiple practice rounds and dinners , etc., all of which Tiger had complained about, would he consider one day skipping the event. To which he replied, “Let me ask you a question, would you rip me?” Implying that the obligation to play trumped the honor of playing.

The day before the 2004 Ryder Cup, Phil Mickelson practiced not with his team, but by himself… on another golf course, and in 2014 Mickelson flew not with his team to the Ryder Cup but by himself, on his own plane, to Scotland. And at the end of the week, after yet another U.S. loss on foreign soil, when he was criticizing the strategy, not only of captain Tom Watson but of every captain that he had played for since Paul Azinger, he said that, “Nobody here was involved in any decisions,” although he had been asked at the beginning of the week who he wanted to play with and certainly would’ve made the decision all by himself to not fly with his team to Scotland.

The point of rehashing the inelegant nature of some of Tiger and Phil’s Ryder Cup moments is merely to underscore how in my opinion they have been awkward participants both in their words and in their actions and that, combined with their competing personalities, has been the larger part of the losses of the teams they have played on.

The “Blame Game” is never fun and there is no clearly defined responsibility for who’s accountable in each of these losses. Many want to claim that Europe simply cares more, a query put to many a player on both teams and dismissed by all, but none so poignantly as Lee Westwood back in 2002 when he stated that whoever said such a thing was speaking out of their backside, asking everyone thereafter to pardon his French. He went on to say that he had seen up close the passion in the eyes of the American players and that they wanted the Ryder Cup not one ounce less than the Europeans.

Many want to argue that the Europeans just get along better and that makes all the difference, as if camaraderie alone would allow them to beat a team nearly twice as good as them over and over and over again. While camaraderie is hugely important to a team optimizing its potential, relationships ebbing and flowing as they do, it cannot be as simple as the Europeans have a few more laughs so they dominate a team nearly twice as good as them for more than 20 years.

More likely it has been a combination of Europe coming close to optimizing its potential, a sort of alchemy that has eluded the United States, who has come nowhere close to optimizing its. The various U.S. captains, just as Agamemnon struggled with a surplus of heroes 3,000 years ago, have struggled to get the best out of the two best players in the world for the better part of two decades. It’s the Tiger and Phil dilemma, if you will. Which given the lopsided losses of the teams that they have been on together, is at least a plausible explanation for the results.

It’s possible that there simply has never been two stronger competing personalities on a U.S. team than the duo of Tiger and Phil. Jim Furyk’s Ryder Cup captaincy will likely be defined by the impact that Tiger and Phil have on his team, and while both seem to have adopted a generosity of spirit toward the Ryder Cup in recent years, it remains to be seen if their presence on a team can be directed toward a purposeful whole.

In determination. In achievement. In scandal. In iconography. There are few people who can relate to Tiger Woods. Woods and the world lost one of them Sunday in Kobe Bryant.

Tiger Woods finished inside the top 10 at Torrey Pines, where news of Kobe Bryant's death overshadowed the play on the course.