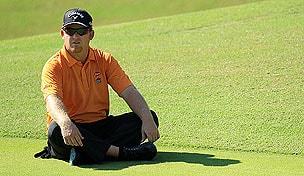 Getty Images
AUGUSTA, GA - APRIL 09: Luke Donald of England slaps five with his caddie during the third day of practice prior to the start of the 2008 Masters Tournament at Augusta National Golf Club on April 9, 2008 in Augusta, Georgia. (Photo by Harry How/Getty Images)  -

SAN DIEGO – On a window sill in his closet is a chunk of bone that reminds J.B. Holmes why he’s lucky to play golf for a living.

It’s part of his skull that was removed during brain surgery in September.

Holmes laughed Tuesday when he talked about this peculiar memento, even though there were a few nervous moments that made him wonder if he would ever get back to the PGA Tour.

In more somber moments, he is thankful to be back on Tour at the Farmers Insurance Open, his first tournament since he withdrew from the PGA Championship after opening with an 80. He had been dealing with vertigo symptoms since May, and eventually was diagnosed with structural defects in the cerebellum known as Chiari malformations.

The only time he truly felt nervous was slipping into a hospital gown before the Sept. 1 surgery. Even now, he only realizes how daunting it all was when he goes into details when answering questions.

He handled the news with the same ease he hits 330-yard tee shots.

“It’s scary at first,” he said. “Talking to the surgeon and stuff, he said for brain surgery, difficulty-wise for him it was only about a 1 out of 10. It’s still brain surgery, but that at least made me feel better. Then I got to the hospital and started putting on the gown and everything else and it was like, ‘Wow! I’m about to have brain surgery.’ So it really hits you then.

“But you’ve just got to put your faith in God and just hope everything comes out good.”

There was one nervous moment.

About a month after surgery, he started getting headaches and then began vomiting. Fluid had been building up around the scar, and doctors discovered later that Holmes was allergic to the adhesive used on the webbed titantium plate at the base of his skull. Leaving nothing to chance, he was airlifted from his home in Kentucky to Johns Hopkins in Baltimore for another surgery.

“They had me on so much painkillers I didn’t remember much,” he said. “I started out in Campbellsville and woke up in Baltimore. I remember vaguely getting on the plane and getting off.”

That delayed his return – he originally wanted to play in the Shark Shootout – though he is eager to get started. Holmes has lost track of the number of players who greeted him at Torrey Pines. Golfers miss time with injuries to knees, shoulders and elbows. Brain surgery, even though Holmes makes it sound like outpatient surgery, is not something they are used to hearing.

“It’s great to see any fellow golfer, anybody you work with, come back from an injury – any kind of injury,” Bubba Watson said. “But something like that … I mean, brain surgery is not easy. That’s something that’s serious. That could be career-ending. But him coming back, who knows how he’ll hit? Who cares if he misses the cut, makes the cut, if he wins. It’s just good to see him back out here.”

Holmes and Watson often are mentioned in the same sentence when it comes to the longest hitters in golf. Despite missing the last three months of the season, Holmes still led the PGA Tour in driving distance at 318.4 yards. Watson was second.

He doesn’t hit it with as much pop at the moment.

Holmes first pulled out a driver on Dec. 1 and hit it about 240 yards. The speed of his club was 106 mph, well below his typical swing speed of up to 125 mph. Now he’s up to about 115 mph as he works to regain full motion in his head rotation.

His greatest strength came from faith, in the diagnosis and the doctors.

Holmes’ girlfriend, Erica Kalbhin, is a nurse. His mother was a nurse. They knew what he was facing. He chose not to know everything. He needed surgery. He scheduled it. And then came the recovery.

“If I really sat down and just think about it, yeah, it was extremely scary,” he said. “Luckily, I didn’t dwell on it. I didn’t study up on it and read everything about the surgery and see what could go wrong. I’ve got to go get surgery, let’s get it done. Do what I’ve got to do to get back out here. So it never really crossed my mind that I wasn’t coming back, or I wasn’t going to play again.”