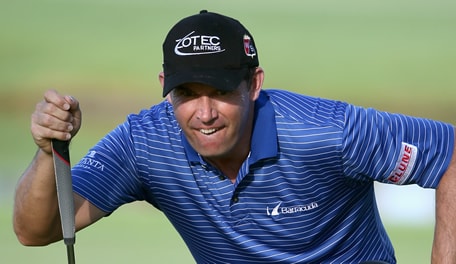 Leave it to Harrington to emerge the winner of the craziest final round on the PGA Tour this season.

It took two days to complete the final round. Four of the five players who had a share of the lead hit shots into the water down the stretch. That included Harrington, who appeared to throw it away when he hit into the water on the par-3 17th and made double bogey to fall one shot behind.

Harrington, a three-time major champion and resilient as ever, followed with the birdie for an even-par 70 to get into a playoff with Berger, the hometown rookie who closed birdie-birdie for a 64. They finished at 6-under 274.

Both missed birdie putts on the par-5 18th in the playoff. And on the 17th hole, the roles were reversed. Harrington got his redemption, hitting his tee shot to 3 feet. Berger, whose 7-iron into 8 feet in regulation was key in getting into the playoff, followed Harrington with a shot into the water.

Berger took double bogey. Harrington missed from 3 feet, but it didn't matter. He was a winner again on the PGA Tour for the first time since his second straight major at the 2008 PGA Championship at Oakland Hills. And he's going back to the Masters.

"Believe it or not, when I get in contention I can still hit the shots," Harrington said.

The final hour was calamitous at PGA National.

"The good is good enough to win. I know that," Poulter said. "It's just bitterly disappointing to put myself in the position I have, to play as well as I've played ... and a couple of loose shots has cost me this tournament. It's a shame to hand tournaments away. I've handed one away this week."

Patrick Reed, tied with Harrington at 7 under, came up short on the par-3 15th and into the water for double bogey, and he never recovered. He bogeyed the next two holes and closed with a 73.

Paul Casey also had a share of the lead until a bogey on the 14th hole, and he never got it back. He missed a 20-foot birdie chance on the 18th that would have put him in a playoff and closed with a 68 to tie for third with Poulter and Russell Knox, who shot a 68.

Phil Mickelson was four shots behind when he returned Monday morning to face a 10-foot par putt on the ninth hole. He missed and didn't make a birdie. Mickelson shot a 73 and tied for 17th, six shots behind.

Harrington's last victory was at the Indonesian Open on the Asian Tour at the end of last year, and while it wasn't against a strong field, it did a world of good for his confidence. He talked earlier in the week about the royal treatment a three-time major champion gets in Asia, and that it was easy to get lost on the PGA Tour.

He found himself again by playing like the Harrington of old.

Lost in all the collapses down the stretch was that the 43-year-old veteran was five shots behind with eight holes to play when he hooked his tee shot and dropped his head walking off the 11th hole. It was enough left of the fairway to find a patch of muddied grass that had been trampled by the gallery, and he played a bold shot to a right flag over the water to 15 feet for birdie. That's where Poulter went into the water, and the three-shot swing meant Harrington was back in the game.

Berger was not even part of the picture and only took the lead when he was done with his round. He chipped in for birdie on the 11th hole at the end of Sunday when darkness stopped the final round. And then he made two birdies at the end, including a two-putt from 40 feet on the 18th.

Berger had a 15-foot birdie putt on the 18th to win and just missed left of the cup. That was his last chance.