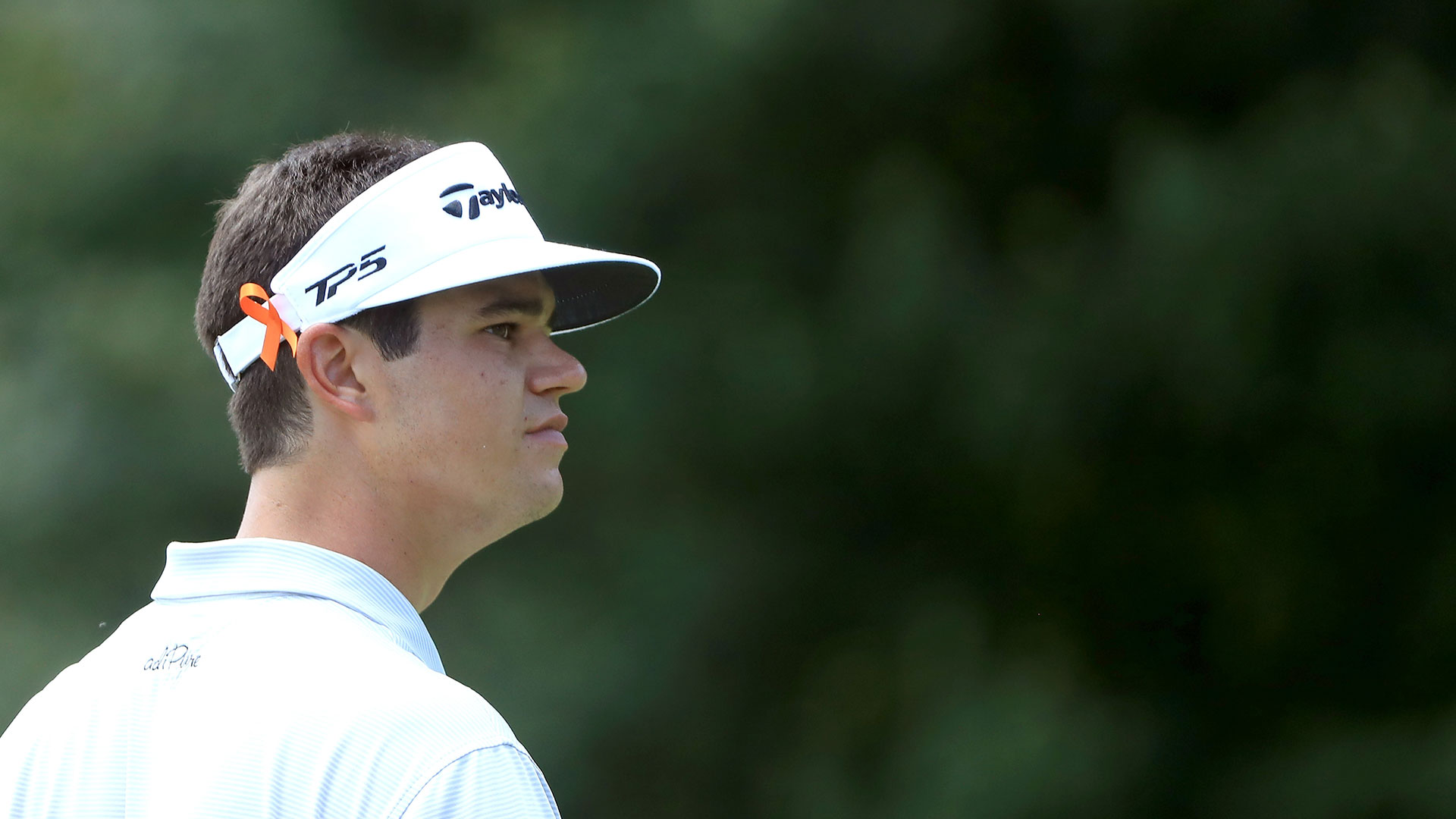 POTOMAC, Md. – Beau Hossler has been hanging around the lead on the weekend in search of his first PGA Tour victory, and he gets another chance at the Quicken Loans National.

So does Tiger Woods.

Hossler, the 23-year-old in his first full year on the tour, birdied four of his last five holes and finished with a 35-foot birdie putt on No. 18 for a 4-under 66, giving him a share of the lead with Ryan Armour and Brian Gay.

Armour (65) and Gay (64) each made short birdies on the par-3 ninth hole to finish their rounds and tie for lead.

Woods finished a steamy morning on the TPC Potomac at Avenel with two pars that felt just as big. On a day in which he made seven birdies - all but two of them from 15 feet or longer - Woods didn't let a good round go to waste at the end. He saved par from the bunker on the eighth and ninths holes for a 65. That matched his low score of the year and left him four shots behind, the closest he has been going into the weekend since he was two shots back at the Valspar Championship.

''I'm not that far back,'' Woods said. ''The scores aren't going to be that low and it's going to be a tough weekend. It will be over 100 degrees and it will be a long weekend mentally and physically. I'm in a good position now.''

Hossler has at least a share of the 36-hole lead for the third time this year, and he had a close call in the Houston Open, losing in a playoff to Ian Poulter. He has shot in the 60s in 21 of his last 38 rounds.

''I've had a lot of really good rounds. Unfortunately, I've had some kind of high ones that are uncharacteristic for me,'' Hossler said. ''I think that was six in a row in the 60s, so I'm feeling good. I'm getting it in play nicely off the tee and I'm rolling the putter really well, so that obviously helps.''

They were at 9-under 131, one shot ahead of Francesco Molinari (65) and Billy Horschel (68). Molinari, who is playing the Quicken Loans National and John Deere Classic with hopes of boosting his FedEx Cup standing, hit all 18 greens in regulation.

Woods was among 20 players separated by four shots going into the weekend that is expected to be hot as ever along the Potomac River.

The course rated the fourth-toughest on the PGA Tour schedule last year behind only three majors, though the greens have remained mostly receptive even under a blistering sun on Friday.

Hossler had a 66 on Sunday at the Travelers Championship to tie for second behind Bubba Watson. He began his big finish by driving just through the green on the reachable 14th for a simple up-and-down birdie, stuffed his approach to 3 feet on the next hole, and then took on the water to the right of the green on the par-3 17th and hit that to 6 feet for birdie.

Gay started on the back nine and opened with five birdies in eight holes before his momentum slowed. Armour, playing in the same group, had only one birdie in 10 holes until he finished with four birdies on the front nine.

Rickie Fowler, the only player from the top 10 in the world playing this week, shot a 66 and was in the group five shots behind.

Woods didn't make a putt over 8 feet in the opening round. He started Friday with a 25-foot birdie putt on the par-5 10th, and after a bogey from the hazard on the next hole, followed that with an 18-foot birdie putt. His biggest shot was chipping in from 80 feet on the 18th for birdie as he made the turn. His favorite shot was a 3-wood he hammered from 282 yards onto the green at the par-5 second hole for a two-putt birdie.

It added to a 65 and a realistic chance going into the weekend.

''I think I'm not that far away from putting it together where I can win,'' Woods said.