Notes: Koepka has Tiger's vote for Player of the Year 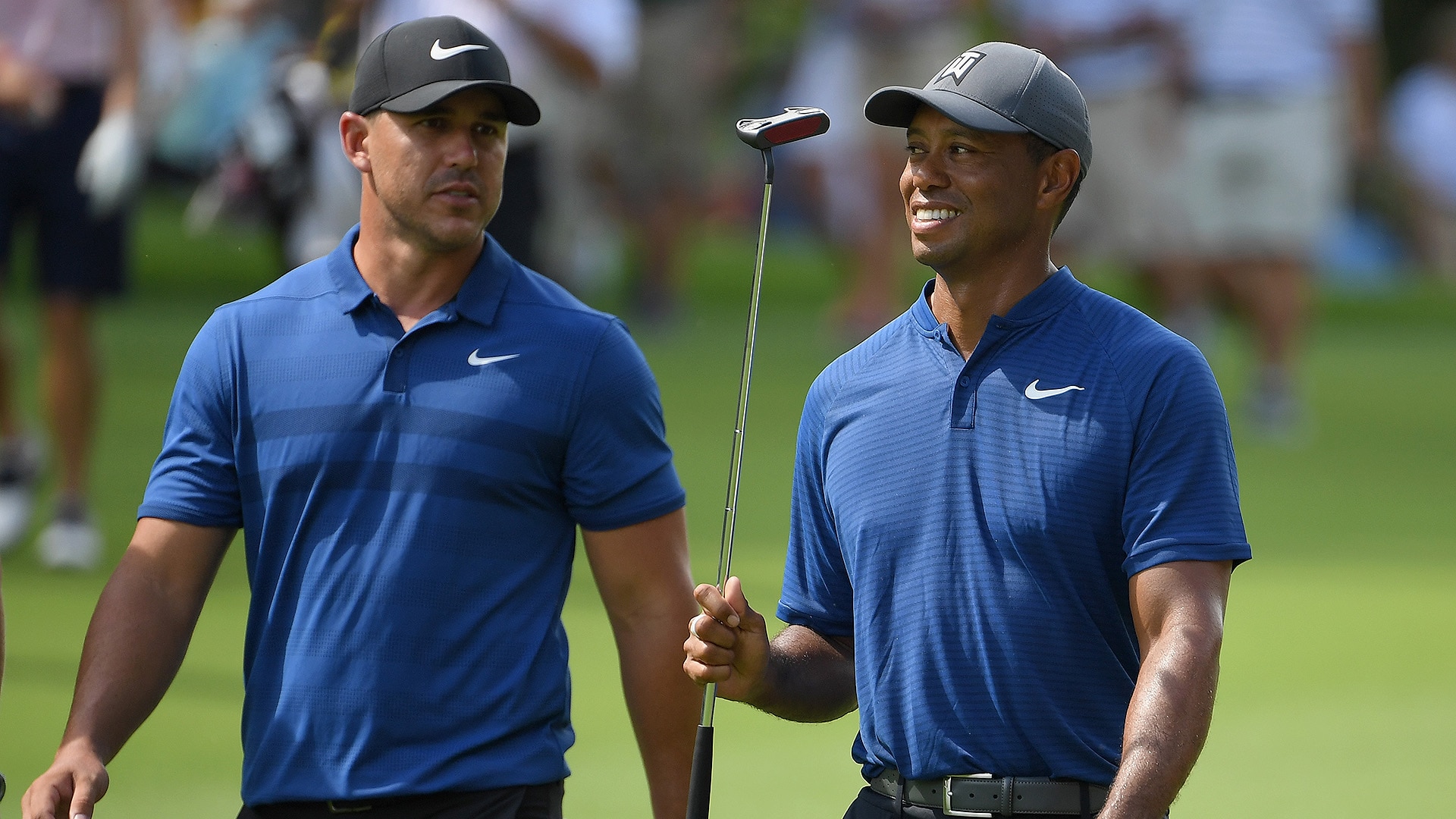 PARAMUS, N.J. - Brooks Koepka already can count on one award this year. He has clinched the points-based award from the PGA of America as Player of the Year. Majors are worth 30 points, and there is a 50-point bonus for winning two of them. That gives Koepka 110 points for his U.S. Open and PGA Championship victories.

Even if Dustin Johnson, Justin Thomas or Bubba Watson wins all four FedEx Cup playoff events for seven titles this year, they would not catch Koepka.

The PGA Tour award is a vote of the players.

That's still up for grabs, though Tiger Woods thinks the race is over.

Woods thought back to 1998, when David Duval won four times on the PGA Tour. The PGA Tour vote went to Mark O'Meara for his Masters and British Open titles.

A QUICK TURN FOR THE BETTER

Stewart Cink enters the FedEx Cup playoffs at No. 58 in the standings, his best starting position since 2010. Thanks to a tie for fourth at the PGA Championship, he will return to the Masters for the first time in five years.

He would not have seen this coming three months ago.

Cink enjoys the late spring because he typically plays well on some of those courses, such as Colonial, Muirfield Village and Quail Hollow. Bad final rounds turned potential top 10s into middle-of-the-pack, if not lower. The final straw was Memorial, where he ended a streak of making the cut in 19 consecutive appearances.

''I felt like crap playing bad golf,'' Cink said. ''I had to have a little bit of something to wake me up. I didn't do anything new, I just recommitted to what I was working on the last year.''

That can be a tall order for a 45-year-old whose last victory was the 2009 British Open at Turnberry. Cink put in time with swing coach Mike Lipnick, and he started hitting the ball the way he envisioned the flight. Over the next two months, he had three top 5s - a runner-up at the Travelers Championship when he closed with a 62, and a tie for fourth at the St. Jude Classic and the PGA Championship.

The real test was at Bellerive, where he played in the raucous arena with Tiger Woods in the third round and matched his 66. In the mix at a major for longer than he can remember, Cink finished with two birdies for a 67 to tie for fourth.

''Being paired with Tiger helped me,'' Cink said. ''I was nervous playing with the Tiger. The crowd was a factor. It felt like a Ryder Cup. It was a great challenge, and I really wanted to embrace it and test myself and see how well I can hang in there. I didn't have the option to fall back into a comfort zone. There wouldn't have been one in that group. I'm proud of myself the way I played.''

Cink's five-year exemption to the Masters from his British Open victory ran out in 2014, when he shot 68 on Sunday and missed by one shot finishing in the top 12 to earn a trip back to Augusta National. He looks forward to going back.

But that's in April. Ahead of him is a chance to return home to East Lake for the Tour Championship for the first time since 2009.

More than recommitting to his golf, Cink said his heart is in the right place. The last two years have provided the ultimate test after his wife, Lisa, was diagnosed with late-stage breast cancer. He said her health has been steady - no setbacks - the last several months.

''It goes without saying that my life has taken on a different perspective,'' Cink said. ''I'm enjoying playing golf. I don't have anything to lose. I'm having fun competing, testing myself. There's no downside. ... I wish I could tell my 18-year-old self that.''

WRAPPING UP THE MAJORS

An obscure record was set at the PGA Championship. Seven players had all four rounds in the 60s, led by champion Brooks Koepka. The others were Stewart Cink, Jon Rahm, Francesco Molinari, Justin Thomas, Justin Rose and Webb Simpson.

Koepka and Charl Schwartzel each shot 63 in the second round. That extended the streak to four consecutive years when at least one player shot 63 or better in the majors. Tommy Fleetwood also had a 63 at the U.S. Open, so that makes 2018 the fourth time there were at least three rounds of 63 in the same year. The other years were 1980 (Jack Nicklaus and Tom Weiskopf at the U.S. Open, Isao Aoki at the British); 1993 (Nick Faldo and Payne Stewart at the British, Vijay Singh at the PGA); and 2016 (Henrik Stenson and Phil Mickelson at the British, Robert Streb at the PGA).

Tiger Woods also got in on the act. His 64 in the final round at Bellerive tied for low score of the round. The last time no one had a lower score than Woods in one round at a major was in the 2010 U.S. Open at Pebble Beach, where he and Dustin Johnson each shot 66 on Saturday.

Wake Forest junior Jennifer Kupcho has won the Mark H. McCormack Medal as the leading player in the 2018 world amateur golf ranking. The award gives Kupcho an exemption into the U.S. Women's Open and the Women's British Open provided she stays an amateur. ... Brooks Koepka, Justin Thomas and Justin Rose each have a mathematical chance to reach No. 1 in the world this week at The Northern Trust. ... The University of St. Andrews is honoring teaching pro Renee Powell and British journalist Katharine Whitehorn by naming a residence hall after each of them. Powell in 2008 became the first female golfer in the five centuries of St. Andrews to receive an honorary doctorate degree. ... Darren Clarke makes his PGA Tour Champions debut this week at the Boeing Classic outside Seattle.

''You don't want to be put on the bench in the playoffs.'' - Harris English, whose tie for 11th at the Wyndham Championship was narrowly enough for him to qualify for the FedEx Cup playoffs.