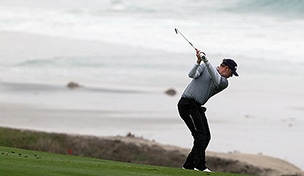 Getty Images
UNIVERSITY PLACE, WA - JUNE 18: Henrik Stenson of Sweden and caddie Gareth Lord walk off the 18th hole during the first round of the 115th U.S. Open Championship at Chambers Bay on June 18, 2015 in University Place, Washington. (Photo by Andrew Redington/Getty Images)  -

LOS ANGELES – One of the most gorgeous tee shots at Pebble Beach is one that hardly anyone hits.

At least for now.

Pebble Beach officials were rebuilding the ninth green last year when they discovered from photos of the 1929 U.S. Amateur a tiny sliver of land just to the right of the green. It was a tee box of the par-4 10th hole along the ocean. The tee box never went away, rather it was buried beneath high grass.

R.J. Harper, the executive vice president of golf and retail, figured it was the perfect time to put it back.

The 10th hole goes out to the farthest point at Pebble Beach, a par 4 that is 448 yards for PGA Tour competition, and 495 yards for the most recent U.S. Open. With this tiny tee box directly to the right of the ninth green, Harper said the hole measures 349 yards.

Since it was restored, the tee has been used only for a couple of special occasions. It's a traffic issue. To use that tee, players could only exit to the left in front or behind the ninth green, which would hold up play on the ninth hole.

But it's a cool shot – directly over the ocean, with players able to take on as much as they want. And with the U.S. Amateur coming in 2018 and the U.S. Open the next year, one thought is for the tee to be used for one round. With a helping wind in summer months, big hitters might be tempted to go for the green.

''Mike Davis knows that it's there,'' Harper said of the USGA's executive director. ''He's coming out in the next few months.''

It got the attention of players on the ninth green, to see the small, rectangular box between the green and the cliff.

''It looked really cool,'' Jordan Spieth said. ''Doesn't look like it's going to be used because it's a lot shorter hole from there. But if it was up another 30 yards, it makes it almost drivable. And that would be a really cool hole if 10 was drivable with the water sticking in there, and the way the green is shaped. That would be a pretty awesome hole.''

Would be for the green?

Spieth will be 25 when the U.S. Open returns to Pebble Beach.

THE GOLDEN STATE: Not even a week of rain at Pebble Beach can take away the memory of golden sunshine on Paul McGinley's first trip to California.

The Ryder Cup captain had never left Ireland when he saved up his money to travel to San Diego to attend U.S. International. Given his limited funds, McGinley's flight took him from Dublin to New York to Chicago to Los Angeles to San Diego in late December.

''This is how innocent I was,'' McGinley said. ''I was 22 years old. When I got to LA, I wanted to go outside. I wanted to feel the temperature. I had never experienced sunshine in December, and I wanted to see what it felt like.''

He finally made it to San Diego late at night, and he had a day of leisure before reporting to school.

''I remember the next day I wanted to see the beach,'' he said. ''I was just out of Ireland – I had a much stronger accent than I do now – and I saw La Jolla on the bus, and I knew that was the beach. It was three minutes trying to tell the guy where I wanted to go.''

Trouble was, McGinley thought it was pronounced ''La JAH-luh'' instead of ''La-HOY-ya.''

''This guy had no idea what I was saying with my thick Irish accent,'' he said. ''I ended up pointing to the front of the bus.''

SPEEDY SNEDS: Brandt Snedeker and Brian Gay played together in the AT&T Pebble Beach National Pro-Am. When the third round was halted by darkness, Gay was still on the 16th hole, and Snedeker was done with his round.

Hey, he is one of the quickest players in golf. This move, however, required a little imagination.

Snedeker was 8-over for the tournament with no chance of making the cut. Walking off the 16th tee Saturday evening, the players ran into a rules official who said they were 10 minutes away from blowing the horn to stop play. When darkness is involved, a player has the option of finishing the hole he is on.

Snedeker quickly finished the 16th, then teed off on the 17th. Gay said Snedeker's amateur partner, Toby Wilt, headed straight to the 18th tee and put a ball in play. That allowed Snedeker to play the 17th after the horn sounded, and then play the 18th because at least one member of their group had teed off.

He birdied both holes for a 77.

Here's the final piece of this oddity – Snedeker's 77 wasn't official until Sunday morning because Gay had his card.

Snedeker's card was reconstructed and signed by the official scorer and a tour official, along with Gay, and then approved. It was out of the ordinary. But it's Pebble.

CADDIE FOR A CURE: Fans have until Feb. 19 to bid online for a chance to caddie for Cy Young Award winner Roger Clemens, Pittsburgh Steelers quarterback Ben Roethlisberger, jazz star Branford Marsalis and country music singer Toby Keith during the pro-am at the Honda Classic.

The four celebrities will be part of the ''Gold Pro-Am'' at PGA National on Feb. 26.

It's part of the popular ''Caddy for a Cure'' program in which fans can bid to caddie during a PGA Tour pro-am for a player. In his case, it's a celebrity. Proceeds support numerous local causes, including Wounded Warriors, Fanconi anemia and children's health care.

To honor the wounded warriors, four retired Navy SEALS who have been wounded and a severely injured Special Ops member will escort the group.

Bids can be made on www.caddyforacure.com.

DIVOTS: Graeme McDowell knew he wasn't going back to the U.S. Open when he played Pebble Beach last week, and not because of the weather or that he could play with his father. That moment arrived Saturday morning. Arriving at Pebble for the third round, a security guard asked to see his ticket. ... European Ryder Cup captain Paul McGinley is headed to the broadcast booth this year, at least temporarily. He said he will be doing commentary for Sky Sports at a few PGA Tour events, which will help keep a pulse on potential players. One of those events will be The Players Championship. Meanwhile, Sky has extended its contract with the PGA Tour through 2021 that gives it exclusive rights to televise PGA Tour events in the UK and Ireland. ... Ernie Els has added another endorsement, signing with Maui Jim sunglasses. ... The USGA has selected two-time U.S. Open champion Payne Stewart to posthumously receive the Bob Jones Award. It's the USGA's highest honor, recognizing a person who demonstrates the spirit, character and respect for the game. It will be awarded during the U.S. Open at Pinehurst No. 2., where Stewart won in 1999.

STAT OF THE WEEK: A tie for fourth last week at Pebble Beach pushed Jordan Spieth's career earnings to more than $5 million. He turns 21 in July.

FINAL WORD: ''I thought I was the only one who could get everything wrong and still get paid.'' – CBS Sports analyst David Feherty on the weather forecast at Pebble Beach.