Wie getting the best of both worlds 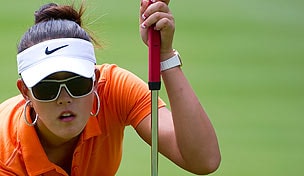 Getty Images
PEBBLE BEACH, CA - FEBRUARY 11: Luke Donald of England waits on the tee on the sixth hole during the first round of the AT&T Pebble Beach National Pro-Am at Pebble Beach Golf Links on February 11, 2010 in Pebble Beach, California. (Photo by Stephen Dunn/Getty Images)  -

PALO ALTO, Calif. - Michelle Wie did not go to Stanford to play golf, at least not the game that brought her worldwide fame as a teenager.

“One time, me and a couple of guys played campus golf,” said Wie, sitting in a coffee house on campus after her longest day of classes. “You hit tennis balls with a golf club. You start at the frats and end at the fountain, so that’s like one hole. We hit cars, we hit some bikers. Just goofy things that you don’t usually do.”

These are the goofy times she wouldn’t trade for anything.

Moments like tailgating at the Fiesta Bowl before Stanford played Oklahoma State. Sitting - mostly standing, actually - in the student section behind the bench at Cardinal basketball games. Spending all day roasting a pig before a Super Bowl party. Catching up with friends at the Coho Cafe, where cartoon figures of famous alumni are painted on the walls.

There’s a caricature of Fed chairman Ben Bernanke, and even one of Tiger Woods, who won an NCAA title at Stanford. Wie’s face is not among them. She’s a student, just like everyone else.

And she appears to be loving life more than ever.

“My life has progressed in various ways than I thought it was going to,” said Wie, who laughs easily these days. “I’m more rooted in what I’m doing. I guess that’s called growing up.”

For much of her teenage years, all Wie heard was that she was going about life the wrong way. She was playing too much golf, way too early. She was playing against the men. She turned pro as a junior in high school.

Turns out she knew what she was doing all along.

In an era where young players don’t make it all the way through college, if they even go to college, Wie has had the best of both worlds. She’s an LPGA Tour player who has two career wins and finished 18th on the money list last year. And she’s a senior at Stanford, expected to finish next month and go through graduation in June with a degree in communications.

“I think she’s happiest when she’s at school,” said Juli Inkster, who occasionally sees Wie when she comes out to Los Altos Country Club to practice. Inkster’s husband, Brian, is the head pro.

“Time will tell as far as her golf,” Inkster said. “I still think she’s got the talent to be really good. I’m not sure what she wants. She’s still got a ton of talent. And she’s happy being a student. She had a boyfriend on the football team. She said she’s graduating this year. It’s pretty impressive.”

Wie’s parents live near campus, and they accompany her when she practices and when she plays on the LPGA Tour. She is playing her first tournament this week in Thailand, and will stay out for the HSBC Women’s Champions in Singapore. Wie also travels with a Pomeranian she named Lola, which she bought on a whim after browsing through a pet store. College kids are impulsive that way.

It’s easy to speculate that Wie’s development as a player has been slowed by not devoting herself entirely to golf. She looks at it from a different perspective.

What if she had never gone to college?

“I might not be playing,” she said. “I might be burned out. I’m not a person who 24 hours a day can only think, live, eat and breathe golf. I’m not that kind of a person. If I did that, I might be fed up with it. Here, I learned how to live on my own, to do things on my own. My relationship with my parents changed. You change from being a kid to someone your parents respect.”

Wie first gained attention when she played in a junior-pro event at the Sony Open at age 12, and PGA Tour players would stop to watch her swing on the practice range. It was Tom Lehman who called her the “Big Wiesy,” because the fluid swing reminded him of Ernie Els.

She won the U.S. Women’s Amateur Public Links at age 13, the youngest USGA winner of an event with no age limit. A year later, she shot 68 in the Sony Open and missed the cut by one shot. She shared the 54-hole lead at the U.S. Women’s Open at 15, and the next year had a chance to win three LPGA majors on the back nine.

Even when Annika Sorenstam was at the height of her game, Wie drew the biggest crowds.

That began to change when she injured her wrist - only later finding out she had broken three bones - and continued to play. She withdrew from one tournament on the verge of shooting 88, which would have meant being ineligible to play the LPGA Tour for a year, then showed up the next week for a major. She broke par only twice that year. She withdrew from the Women’s Open.

What saved her was showing up at The Farm to start her freshman year.

“A lot of my life, I was doing … even now, going to college, I’m not doing what everyone thinks I should be doing. Everyone has an opinion about me,” Wie said. “I knew I wanted to go to school. After I had my injury, it changed the way I was thinking. I was struggling out there. It was a struggle every day to practice. And it made me realize that I’ve got to enjoy what I’m doing.

“Winning tournaments and being unhappy is not going to cut it.”

That she has made it through Stanford in less than five years is astounding. Wie figured it might take at least six. She takes school work on the road, mixes a full load of classes with practice when she’s home.

And while she is regarded as a part-time player, Wie plays as many tournaments as Woods.

“Ten years ago, all the stories were she was pushing too hard, playing with the guys, she’s going to burn out, and you know how this ends. Another example of a person who didn’t follow the right path and go to school,” LPGA commissioner Mike Whan said. “Jump forward, and she’s top 20 in the world (No. 17), taking 18 credit hours, she’s getting a degree from Stanford.

“I believe the best for her is coming,” he said. “She really got it when everyone else predicted she wouldn’t. She got the last laugh. The coolest thing about Michelle Wie is she likes her life. And we all predicted she’d hate her life.”

Wie has always been about looking forward, though there is one regret. She was playing an LPGA event in 2007 and missed her high school graduation. She won’t make that mistake twice.