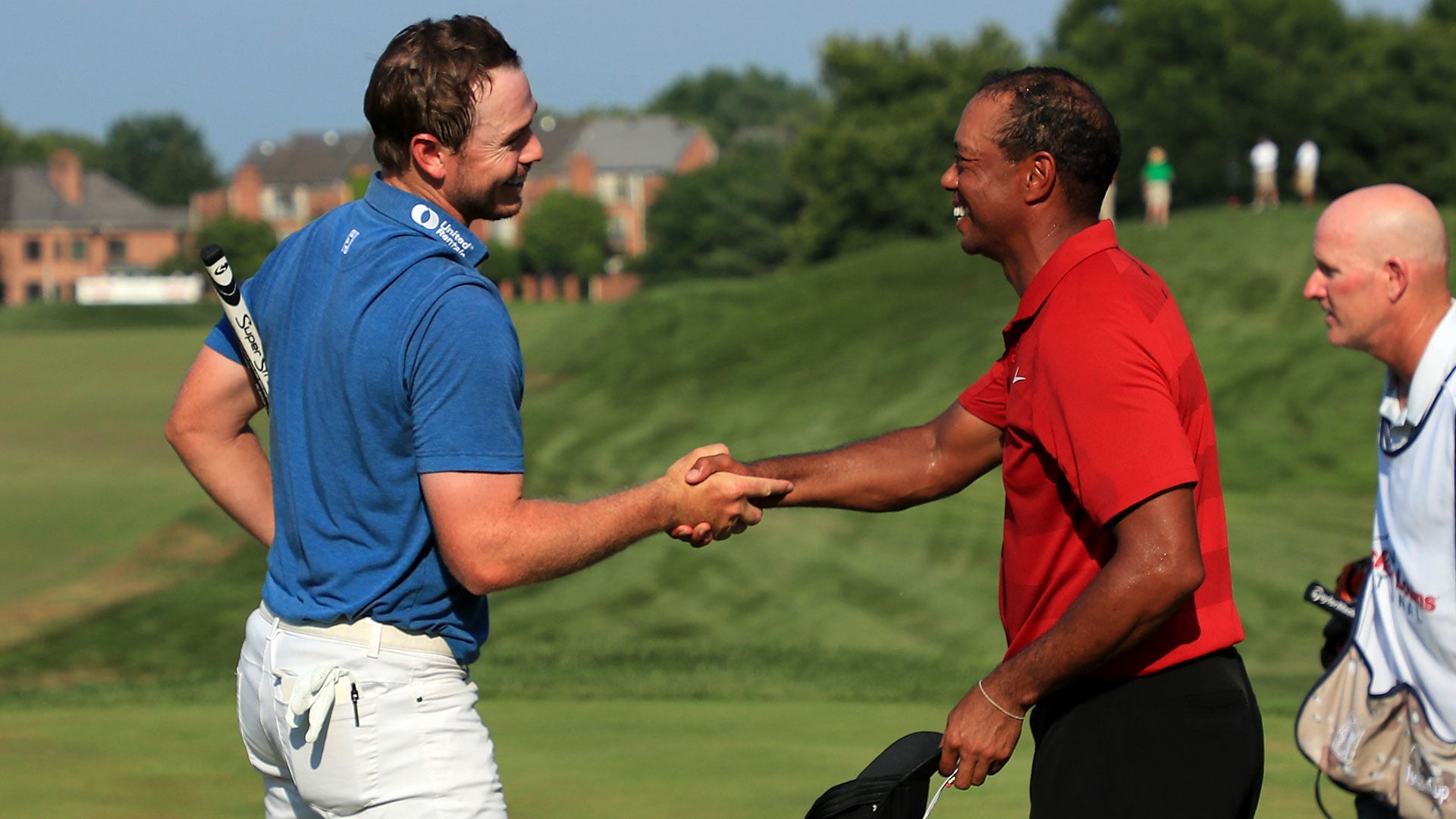 POTOMAC, Md. – Tiger Woods finished the Quicken Loans National with a 66 and was on his way to discuss his performance with the media when he was asked to stop for a few pictures.

Except on this occasion, the request came from the guy who had just signed his card.

''He's in my opinion the greatest golfer ever to play, so it was one of my best rounds I've ever played,'' Bronson Burgoon gushed after his round of 67.

Woods posed with Burgoon and his caddie, and then one of Burgoon's friends stepped in for a picture.

Hold on. One more.

Burgoon's wife came over, and Woods delivered another big smile as if they were old friends.

Woods has a lot of new friends this year.

Woods spent Saturday on the TPC Potomac at Avenel Farm with Joel Dahmen, who also got a picture with Woods, in the scoring area away from the crowd.

''He made his fourth birdie in a row and I couldn't stop smiling,'' Dahmen said. ''That was the coolest thing ever on a golf course.''

There are no feature groups on the weekend. Pairings are determined strictly by the score. Woods has ended up with a half-dozen players whom he had never met until being introduced on the first tee.

Actually, Dahmen said they had met before, at least in his eyes. It was at the Wells Fargo Championship, and they were in player dining when they reached the glass refrigerator at about the same time.

Woods has overcome four surgeries on his left knee and four surgeries on a back. At this rate, his next golf-related injury might be his neck from straining it as he tries to sneak a glance at golf bags to sees whose names are on it.

It's a reminder how much turnover there has been in golf since Woods last played a full schedule five years ago. Sure, he played for the first time in 2013 with players like David Lynn, Kevin Chappell, Richard H. Lee and Robert Streb.

Different now is that Woods is bigger than ever, without winning, perhaps because his legend grew when it looked as though he might never be back. And at 42, it's only natural that he'll be paired with players much younger, players who grew up watching him dominate the sport.

Being gone for what amounted to two full years kept Woods out of the loop except for being an assistant at the Ryder Cup and Presidents Cup. He knows guys in their early 20s, like Justin Thomas and Jordan Spieth and Daniel Berger.

Mackenzie Hughes? Not so much.

The Canadian was paired with Woods on Saturday at The Players Championship. They had never met, but that was on Hughes.

''I was sitting next to him in the locker room eating lunch,'' Hughes said. ''He was 5 feet from me, but I had no valid excuse to say, 'Hey, I'm Mackenzie Hughes.' So I sat there quietly and listened like a fly on the wall.''

Inside the ropes? That was special.

''It's 90 degrees, but I can assure you I had some shivers at times when you hear some of the roars and you realize, 'I'm playing with Tiger Woods,''' he said.

Burgoon is in only his second full year on the PGA Tour, though he played with Spieth in the Houston Open and with Rickie Fowler two years ago in New Orleans. Nothing compared to Sunday at the TPC Potomac.

''I've never seen anything like it,'' Burgoon said. ''I've played with Jordan and Rickie. They bring a crowd, but nothing ... I mean, that's a sea of people. Unbelievable.''

Nothing got to Woods like meeting Burns, a 21-year-old from LSU still trying to get his PGA Tour card. It was the first time Woods has played with someone who was half his age, and that wasn't even the worst of it.

The most prominent player Woods knows from LSU was David Toms. Burns was teammates with Toms' son.

''That's when it kind of hit that there's been a big turnover and I've been away from the game for a while,'' Woods said.

Burns said he couldn't feel the club in his hand on the first tee, though he handled the nerves just fine. He shot 68 and beat Woods by two.

''You see the guy on TV, you see him all over the place and you're standing there next to him on the tee box and you're like, 'That's Tiger Woods,''' Burns said. ''We had a blast. He was super nice. I think we're all happy to see him back playing golf.''