Garcia stands by concession against Fowler 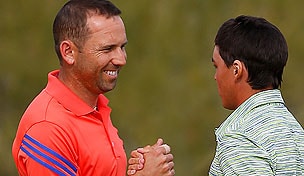 Getty Images
"I'll start rehab soon, but again it's a long and tedious rehab. Last time it took me a very long time to come back." -- Woods when asked about his recovery from a second back surgery
-

PALM BEACH GARDENS, Fla. - Four days after one of golf's most-discussed concessions, Sergio Garcia still believes he made the right call during his match with Rickie Fowler.

"I don't care if some people think it was wrong, or right," the Spaniard explained Tuesday in advance of the Honda Classic. "For me, it was the right thing to do. If not, I would have been thinking about it throughout the whole match, and probably throughout the whole week."

Garcia held a 2-up advantage over Fowler through six holes of their third-round match when he offered to halve the seventh, despite the fact that his opponent faced an 18-foot putt for par while Garcia himself was less than five feet from the hole. He would go on to win the next hole to increase his lead to 3 up, but ultimately would lose the match to Fowler on the 18th hole.

As he explained after the match, the reason for the surprising concession was rooted in a situation on the sixth green, where Garcia took multiple drops to avoid a swarm of bees near his ball.

"It's as simple as that - I felt like I took too much time," he said on Tuesday. "Like I said there, this is the way my dad taught me to play the game of golf. I think winning is important, but playing the game the right way is even more important to me."

Even when faced with the prospect of a similar circumstance at the Ryder Cup, where 11 other teammates might rely on his ability to secure a point, Garcia reiterated that principle could still be more valuable than the outcome of a single match.

"It depends on the situation. If I would have felt like it was the right thing to do, if I would have felt like I went out of my way and took too much time or something, yeah, probably then too," he added. "It shouldn't change because it's the (WGC) Accenture Match Play, or the Ryder Cup. At the end of the day, we all have a great opportunity to be role models ... You should be like that every time you have the chance."