Lexi charges with 64 despite another penalty 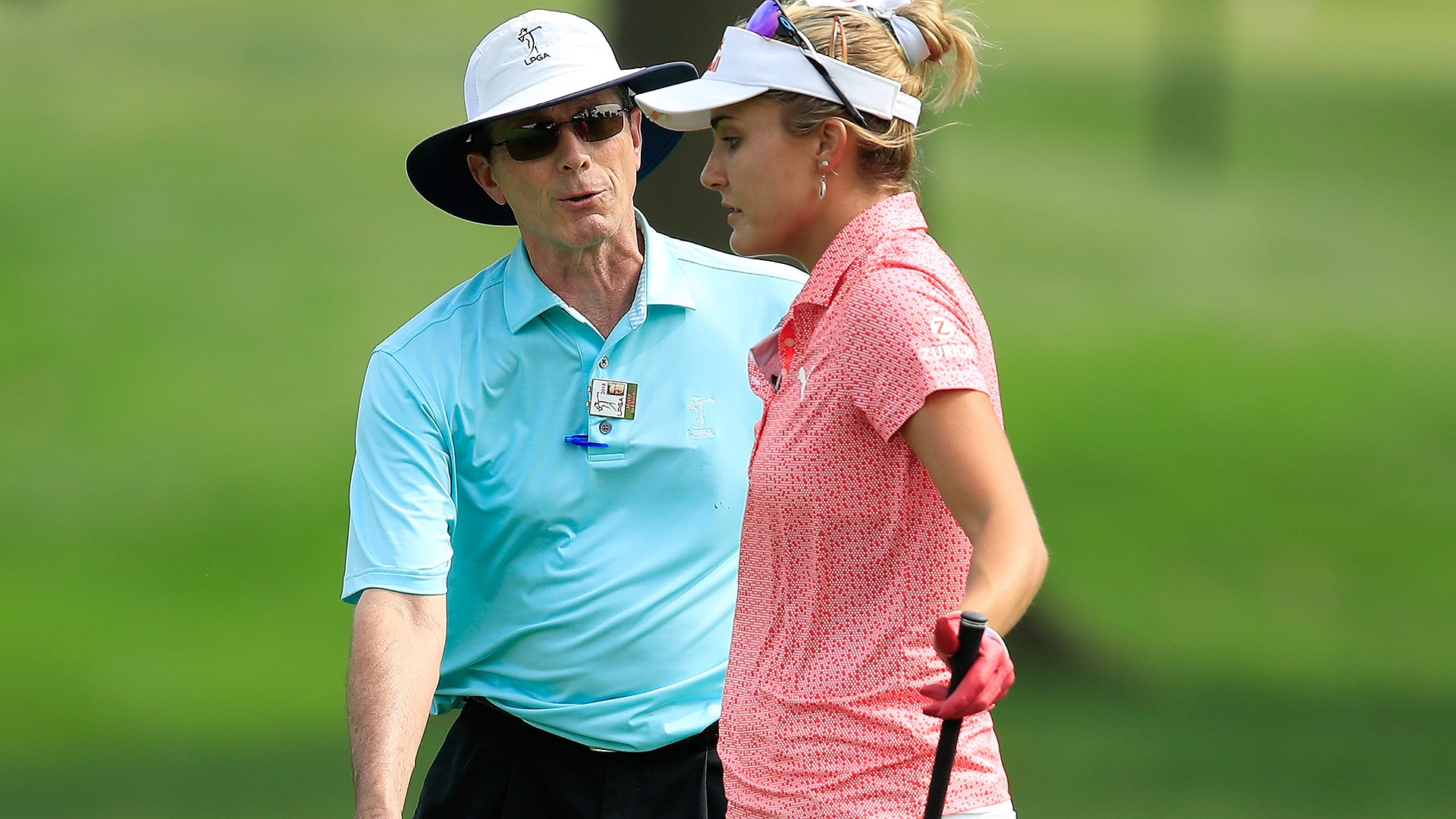 Lexi Thompson ran into another awkward rules issue while making a bold charge at the leaders Saturday at the Indy Women in Tech Championship.

She hit a speed bump at Brickyard Crossing Golf Course when she was assessed a penalty for violating a preferred-lies local rule.

Five shots off the lead at day’s start, Thompson birdied six of the first nine holes, making the turn in 30 to move two off the lead, but that’s where she got her second education this season on the implementation of local rules.

At the 10th tee, Thompson blew her tee shot right, into the sixth fairway. With preferred lies in effect, Thompson picked up her ball, cleaned it and replaced it within a club length before preparing to hit her second shot at the par 5.

According to Kay Cockerill, reporting for Golf Channel’s early live streaming coverage, LPGA rules official Marty Robinson saw Thompson pick up her ball and intervened. He informed her she was in violation of the preferred lies rule, that she was allowed to lift, clean and place only when in the fairway of the hole she was currently playing. She was assessed a one-shot penalty and returned her ball to its original spot, with Robinson’s help. The local rule was distributed to players earlier in the week.

Cockerill said Thompson handled the penalty well, shaking her head when realizing her mistake, and chuckling at her gaffe. She then crushed a fairway wood, from 215 yards, up onto the green. She two-putted from 50 feet and walked away with a par.

“Thankfully, Marty intervened before she hit her next shot,” Cockerill reported. “Otherwise, she would have been hitting from the wrong spot, and it would have been a two-shot penalty. So, in a sense, it saved her a shot.”

Thompson is making a return to golf this week after taking a month-long “mental break.” A year ago, she endured heartache on and off the golf course, with her competitive frustration having much to do with being hit with a controversial four-shot penalty in the final round of the ANA Inspiration. She appeared to be running away with a victory there but ended up losing in a playoff.

Earlier this year, Thompson got another education in local rules. She was penalized in the second round at the Honda Thailand after hitting her ball next to an advertising sign. She moved the sign, believing it was a moveable object, but the local rules sheet that week identified signs on the course as temporary immovable obstructions. She was penalized two shots.

In her pretournament news conference this week, Thompson shared how difficult the ANA controversy, her mother’s fight with cancer and the death of a grandmother was on her emotionally. She also was candid about the challenge of growing up as a prodigy and feeling the need to build a life about more than golf.

She made back-to-back birdies at the 13th and 14th holes to post a 64, giving her a Sunday chance to win in her return.

Statement from the LPGA

While playing the third round of the 2018 Indy Women in Tech Championship, Lexi Thompson incurred a one-stroke penalty for breach of the preferred lies local Rule (Appendix IA Part 3b Course Conditions).

The Committee adopted the preferred lies local Rule due to the turf conditions of the golf course after receiving over an inch of rain.  The LPGA, under the local Rule, restricts the player from preferring her lie when her ball lies in a closely-mown area of a hole other than the one being played.

She preferred her lie in breach of the local Rule but prior to playing her stroke from a wrong place (Rule 20-7), she was questioned by a Rules official regarding her actions.  As she had not played her stroke from the preferred spot, she did not receive the general penalty of two-strokes under the local Rule. However, she did incur a one-stroke penalty under Rule 18-2 for lifting her ball at rest without authority.