Nicklaus on Woods: 'He's the best' 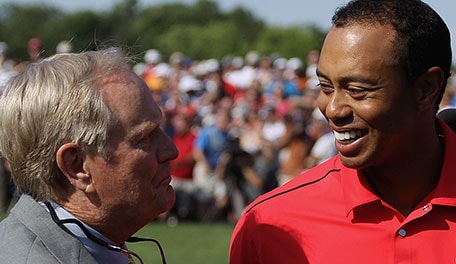 It remains to be seen whether Tiger Woods can match Jack Nicklaus' haul of 18 majors, but perhaps Woods doesn't need to lift trophy No. 18 to be considered the greatest - even in the eyes of the Golden Bear.

In the recent Golf Digest profile on U.S. Ryder Cup captain Tom Watson, he describes a conversation he had with Nicklaus while watching Woods in action.

"Nicklaus and I were watching Tiger play on TV," Watson said. "I can't remember where it was. I think it was at the Senior Skins Game. So we were in Hawaii. I said, 'Bear, he's the best, isn't he?' Jack said, 'Yeah, he's the best.'"

The statement isn't exactly a surprise coming from Nicklaus, who has been complimentary of Woods throughout his career and has remained confident that the 38-year-old will one day break his record for the most majors won, despite the fact that Woods' most recent major title came more than six years ago.

The Tiger vs. Jack debate will likely rage on should Woods fall short of Nicklaus' major mark, but it appears that even based on his current list of accomplishments, he might have Nicklaus' vote.