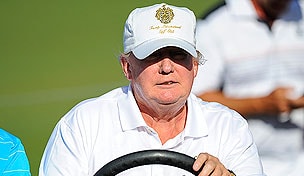 It appears The Donald could soon be hosting the Open.

According to a report from the U.K.'s Telegraph, real estate mogul Donald Trump is closing in on a deal to purchase Turnberry, the Scottish links course that last hosted the Open Championship in 2009.

The report indicates that Trump is set to purchase the course, currently owned by a subsidiary of the Dubai government, for 35 million pounds (approximately $59 million), citing a source that says, "The deal is not done yet, but it should be soon." If finalized, the deal would add to Trump's extensive golf real estate portfolio, which currently features 16 resorts including the newly-renovated Trump National Doral in Miami, site of the WGC-Cadillac Championship.

Located in Ayrshire, Turnberry has hosted the Open four times, including the famed "Duel in the Sun" in 1977 between Jack Nicklaus and a victorious Tom Watson. The tournament returned to Turnberry 32 years later, when Watson nearly hoisted the claret jug for a sixth time at age 59, ultimately losing to Stewart Cink in a playoff.

There is currently no set date for the return of the Open to Turnberry; the only future sites that have been officially announced are St. Andrews (2015) and Royal Troon (2016). The season's third major will be contested this summer at Royal Liverpool in England.