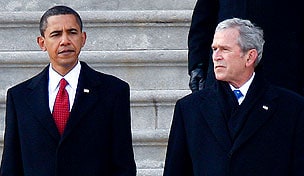 Former President George W. Bush and President Barack Obama may not see eye-to-eye in the political sphere, but when it comes to golf, on this they can agree.

In an excerpt from the season finale of ''In Play with Jimmy Roberts,'' airing Tuesday night on Golf Channel, Bush says he understands the pressures of the White House and that playing golf is a good release.

''You know, I see our president criticized for playing golf. I don't – I think he ought to play golf,'' Bush says in the interview. ''Because I know what it's like to be in the bubble. And I know the pressures of the job. And to be able to get outside and play golf with some of your pals is important for the president. It does give you an outlet.''

In the fall of 2003 – after 2 1/2 years in office – Bush quit playing golf, saying it was inappropriate for the commander in chief to be seen on the course while Americans were fighting and dying in Iraq and Afghanistan.

Various reports estimate Obama has played more than 140 rounds since first taking office in 2008. Obama has played with Tiger Woods and received lessons from Butch and Claude Harmon earlier this year.

Tune in to Golf Channel Tuesday at 10:30 p.m. ET for the full episode, and view the preview excerpt with the 43rd U.S. President below: