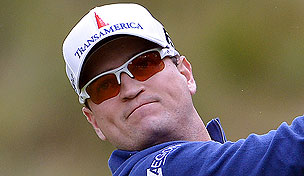 ARDMORE, Pa. – Zach Johnson used strong words to describe his disappointment with the way the USGA set up the U.S. Open at Merion.

“I would describe the whole golf course as manipulated,” Johnson said.

Johnson doesn’t like the way the USGA altered the natural character of Merion.

“It just enhances my disdain for the USGA and how it manipulates golf courses,” Johnson said.

Johnson shot 77 Friday and is at 11 over through two rounds. He's a nine-time PGA Tour winner and the 2007 Masters champ. He played with U.S. Open winners Jim Furyk and Graeme McDowell in the first two rounds at Merion. The trio of major-championship winners were cumulatively 40 over par. McDowell was 13 over, Furyk 16 over. All three will miss the cut.

Johnson was asked if the setup was fair.

“Not when luck is required,” Johnson said. “I think Merion is a great golf course, if you let Merion be, but that is not the agenda.”